Young pianist leaving a mark and living the dream

Life is like a spinning top: Whip it too lightly, and it stops. Whip it too hard, and it may stop, as well. The trick is to keep things balanced.

That was how Tian Jiaxin described her music selection, "Binga Binga," at a piano recital that also marked her Carnegie Hall debut Feb 3. Chinese composer Zhang Shuai wrote the piece and gave it to Tian as a gift ahead of her ascent to the ranks of world-class musicians who have played the venerable New York concert venue.

The song accurately describes Tian: she has indeed found a balance between her career as a pianist, and her life as a 26-year-old woman.

"Jiaxin has the special talent to connect her feeling and heart to her fingers," Jeffrey Cohen, Tian's teacher at Manhattan School of Music, observed. "Piano is a medium. You will know her when you hear her play."

Cohen was right. By the evening's end, Tian had indelibly left her mark, inspiring many audience members to come up to her to shake her hand and express their appreciation of her work.

"I shouldn't say this, but she is great," commented one woman who said she worked at Carnegie Hall and asked not to be identified. "I heard a different Liszt."

At her post-concert reception, Tian called the experience of playing the world-famous concert hall unforgettable. "My dream has come true!" she said. "The feeling on-stage is fantastic. I love it."

In June of last year, Tian played with the New York Concert Artists (NYCA) Symphony Orchestra under the baton of renowned conductor Kazuo Kanemaki. That performance prompted the New York Concert Review to praise Tian's "oneness with the technical nuts and bolts," but also to note that her "unwavering passion and commitment to the work" brought her playing "to a higher level."

Some Chinese media have seen elements of pianist Lang Lang in Tian, a comparison which she understandably finds extremely gratifying.

Unlike many Chinese prodigies who might embark by the tender age of 3 on a musical path that includes intensive conservatory training, Tian, like most other children, went to elementary school, middle school and high school.

"We wanted her to receive a comprehensive education in her early age," said Tian's mother, Wang Yueying, a retired soprano with the Opera Troupe of the General Political Department of the People's Liberation Army. "Although we (both her and Tian's father) understand she enjoys playing piano a lot, we still ask her to learn knowledge other than music."

Tian says she enjoyed her time in academic schools. "I experienced a lot of things which I may not have been able to experience if I went to music conservatories," Tian said. "My performance is based on those experiences, more or less."

Driven to play piano on stage, Tian chose to attend a professional music school after high school. She entered Shenyang Conservatory of Music and studied under Wei Danwen, who, she said, ushered her into a different musical world.

"Wei taught me how to express my emotion through the music," Tian said. "Previously, I concentrated more on technique. The faster I played, the better."

In 2010, she left China and traveled to the US on a scholarship from Manhattan School of Music.

"I know the difficulties of becoming a musician," said Tian's father, Tian Di, a composer and conductor from the General Political Department of the People's Liberation Army. "But every time I saw her play, I could tell she truly enjoyed herself. We want to support her as much as we can."

At the Manhattan school, Tian's teacher, Cohen, motivated her to create and deal with new music pieces on her own.

Erica Mason, Tian's American stay-at-home mother, remembers how on her first day with the family, Tian gave a performance of Liszt's Concerto No 1. "She just walked to the piano, and played the whole thing confidently," Mason recalled.

In May of last year, Tian received her master's degree in classical performance from MSM.

Mason observes that Tian's two years at MSM taught her how to color the emotion in a piece. "Tian's music makes me listen, and I respond to her music in a deeply emotional way," Mason said.

Tian, who describes her personality as "happy and optimistic," said she enjoyed life in New York. "I like the Broadway shows, I like the museums," she said. "The thing I like the most is I can always have a cup of coffee and sit in the library beside the window, enjoy quality time."

Her personality not only drives her to success, but also wins her friends. One of those friends is Susannah Jacobi, a New York psychoanalyst.

Jacobi met Tian in 2010 while waiting for a subway train. "I don't usually talk to strangers," Jacobi says. "But somehow, we started chatting."

Jacobi says she was touched when Tian told her she had traveled to New York alone to pursue her dream of becoming a pianist.

"I used to study piano when I was young, but now I am a psychoanalyst," Jacobi said. "I thought then that Jiaxin could be a great example for my daughter." The meeting coincided with Jacobi's efforts to find more Chinese friends for her Chinese daughter.

In addition to performing, Tian also has begun to explore music pedagogy. In Beijing, in the summer of 2011, she taught a master class titled "Black and White: My Piano Dream," which received praise from teachers, students and parents.

As a teacher, she said, she is drawn to the idea of connecting Eastern music with Western music. "I want to help more Chinese piano students," she said. "I can play famous pieces for them and I would like to share my experience."

"To achieve success on the global stage, a pianist has to have special characteristics," Tian said. "My characteristics are my timbre, my volume control, and my ability to play different types of songs."

"I would like to hold more concerts in the future," Tian said. "I hope the audience remembers me not just as a Chinese girl; I hope they can remember Tian Jiaxin." 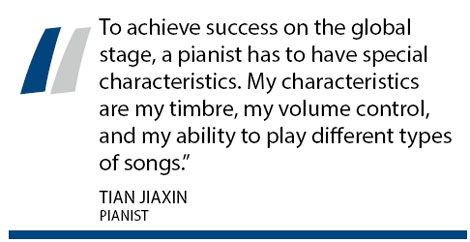