"We have already seen not only a lot of visits but actually hundreds of types of investment that are coming from China to the San Francisco Bay Area," Lee told China Daily.

On his first trip, set to begin in early April, the Chinese-American mayor will arrive Hong Kong and then journey to Beijing and Guangzhou before visiting his ancestral village in Taishan, Guangdong province.

He plans to revisit Shanghai on the second of his trips, scheduled for June.

"We have secured meetings with a number of high officials and business partners for both trips," Lee said. "I can't confirm all of it yet, but it does include the minister of culture."

Lee was asked about last week's announcement that Chinese real estate firm China Vanke Co will join US-based Tishman Speyer Properties in developing luxury condominiums in his city. It's the first investment in the United States by Vanke, which is China's biggest property developer by market value. 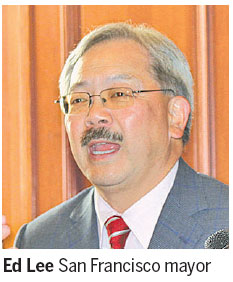 "I would love to promote this happening in San Francisco - that would complement our economy and job creation, and so we're looking for ideas how to sustain that effort," he said.

Lee also said terms are close to being reached on a loan of up to $1.7 billion from China Development Bank for two major San Francisco housing complexes that a US-led consortium is developing.

"We are trying to conclude final details with them; hopefully it will be within the next 30 days," he said of plans for two former US Navy installations named Hunters Point Shipyard and Treasure Island.

Conversion of both sites has been delayed for years by the lack of a private lender despite the city government's commitment to finance the projects with hundreds of millions of dollars in bond financing. Plans call for as many as 20,000 residences to be built between the two projects, as well as a sports arena and office buildings.

China Railway Construction Corp, one of the country's biggest builders, is also involved in the Treasure Island project, and Lee said he has met with representatives of the State company.

"We are trying to get them used to working with American processes and labor," he said. "I'm sure it's as challenging for them as it is for us, but I think we had a good talk."

In another warm-up for his spring travel, the mayor recently met with officials of a Chinese solar-power company that is already doing business in San Francisco.

"We are entertaining a lot of good ideas about how to increase their presence in everything from solar-panel development to getting new business relationships with technology companies."

It's important that the city develop startups in solar power and high-tech industries, because "we know this is where a lot of investment of Chinese money is going to be directed in the long term".

He also sees the Bay Area tapping the interest of Chinese universities to get involved in drug discoveries in the US pharmaceutical industry.

"Curing diseases is as important to them as it is to us," he said.

Regarding the second of his planned visits to China's biggest city, in June, the mayor said: "There is a strong possibility of a Shanghai Film Festival to be located here in San Francisco, probably in 2014."

Lee also addressed the opening of a third Chinese office, in Guangzhou, of ChinaSF, an initiative of San Francisco's government to promote bilateral economic development. ChinaSF already has offices in Beijing and Shanghai.

"The ChinaSF program has been successful in adding more relationships, and some good ideas have flowed to both China and San Francisco," said Lee, who plans to meet with municipal officials in Guangzhou about the new office.

Lee's administration is also working to develop in Guangzhou an event like the Canton Fair (officially the China Import and Export Fair), a semiannual trade show to be held in the southern Chinese city in April.

"We might host a similar trade fair here in 2014," he said. "Again, there are all these good ideas for bringing business across the ocean - better communication, more exchanges and business relationships."