Recalling the voice of the past, in the present 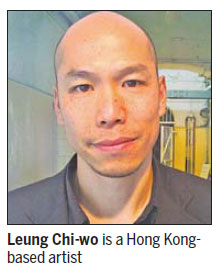 When the French literary theorist and philosopher Roland Barthes published his influential book, Camera Lucida, in 1980, he was grieving the death of his mother. In search of her likeness, he struggled with the false promise of permanence offered by old photographs. They depicted his mother - and yet, no photo seemed to capture her true spirit, he wrote.

A new exhibition by the Hong Kong-based artist Leung Chi-wo explores Barthes' sentiments as applied to audio recordings of two men who are now deceased, Jonathan Napack (1967-2007) and Hiroaki Muragishi (1983-2006). On display at New York's International Studio & Curatorial Program (ISCP) through March 15, "Jonathan & Muragishi" presents Leung's interviews with the men as read by third-party participants, in conjunction with photographs and sculptures constructed from furniture and other domestic objects.

Both Napack and Muragishi were familiar to Leung from the Asian art world before their passing: Napack represented Art Basel in Asia, and worked as a correspondent for The Art Newspaper; Muragishi was a self-taught musician and artist who appeared in Singaporean filmmaker Royston Tan's short film, Monkeylove, as a costumed monkey in search of his own misplaced heart.

Leung interviewed the two men as part of his 2004 photography project, "Domestica Invisibile", in which he explored the "psychological response and physical adaptation to often pre-defined and cramped domestic spaces in urban Hong Kong". Over the course of more than 80 visits to private homes, he took photographs and audio recordings as each resident discussed his or her customized living space.

Listening to the recordings a few years later, he became fixated on the fact that two of his interviewees had passed away.

"As I listened to the recordings, they were like magnets because I became obsessed with the attention you pay to a person who had already died," he said. "It becomes about something more than the content of their words; you can discuss the sound level, the rhythm or style of speaking, in the way you can discuss photography. I have always been interested in Barthes' ideas about how we can look and look at our photographs, but can never truly go back. I listened to these recordings, and became interested in creating a photograph or a narrative around these people who were gone."

A hundred years ago, photographs terrified viewers who did not understand the science behind them; today, only sound recordings still have that potential to disorient listeners, he said.

"We live in a world of images now, so we don't react to photographs that way anymore," he said. "But it's still very different with sound. When we hear recordings, it can be confusing because of how alive and real they sound to us. They're like ghosts; they haunt us."

Leung, who co-founded the Hong Kong art gallery Para/Site Art Space in 1996, first joined ISCP in New York as its first Hong Kong-based resident artist in 1999 on a six-month stay sponsored by the Asia Cultural Council. "Jonathan & Muragishi" is his first show in New York since that residency concluded.

"We're very excited to have him here again, because he's such a pivotal, key figure in the Hong Kong arts scene," said Kari Conte, the art center's director of programs and exhibitions.

Leung is the recipient of the Urban Council Award of the Contemporary Hong Kong Art Biennial (1997), the Asian Cultural Council fellowship (1997), and a first prize in sculpture from the Philippe Carriol Art Foundation (1995). Recent exhibitions have included the Venice Bienniale (2001), Busan Biennale (2006), Guangzhou Triennial (2008), "Depot of Disappearance" in quartier21/MuseumsQuartier and "No Soul for Sale" in the Tate Modern in London (2010).

Although "Domestica Invisibile" was superficially about living conditions in Hong Kong, the project was an attempt to probe the psychology of both the featured residents and his audience, he said. Viewers naturally responded to the voyeuristic nature of the photos, featuring intimate details of private spaces. The artist often found himself suddenly alone in people's homes as they left to retrieve water or tea; he reveled at the false intimacy created by being in such close proximity to a person's daily workings, he said.

Leung approached several well-known figures in the Hong Kong art scene to re-record the transcribed text of his interviews with Napack and Muragishi. Among them were Mimi Brown, founder of the nonprofit art center, Spring Workshop, and a board member of the Asia Art Archive; Robin Peckham, an art critic and the founding director of the commercial art gallery, Saamlung; Ko Hasegawa, a hair stylist and founding artistic director of Hong Kong's Voi Voi Rakkaus; and Hitomi Hasegawa, a curator and founder of the Moving Image Archive of Contemporary Art in Tokyo.

The original interviews were transcribed and translated into Chinese and Japanese; for listeners who speak neither, the experience can be strange and disembodied.

"I felt it was important to have the monologues transcribed and re-recorded to provide distance from the original," Leung said. "I didn't want the sentiments and the emotions of the original people to appear in the work. I want listeners to imagine content from the way they each speak. You listen and you think: Is this something heavy or sentimental? But then it turns out he's only talking about his book shelves."

Provided text reveals one interview to have included the thought: "There is no other way it could be done, you only have this tiny room at the back with any kind of plumbing here. So essentially I crammed the toilet, kitchen, shower into this very small wedge-like place in there. Now it works very well when I am here alone, but obviously it becomes an issue when I have people over, people stay or if my maid comes while I am taking a shower."

That contrast between the seeming banality of the recorded comments and the weight of the men's absence is what drives Leung's work, writes June Yap, an independent curator who was previously deputy director and curator of the Institute of Contemporary Arts in Singapore, in an accompanying catalog essay.

Although Muragishi and Napack are ostensibly the focus of the exhibition, they are only a conduit for Leung's vision, Conte said.

"To me, they are almost imaginary people or fictionalized versions of who [Leung] imagined them to be," Conte said. "They represent a particular generation or way of being in the art world. Today there are many artists who are exploring the rewriting and reinterpreting of history; they are raiding the archives and using source materials to construct new stories and meanings. I think that this work gets at the same themes. He's engaging with the idea of these two men, using the traces of physical materials and recordings they've left behind."

New York visitors will relate to the aspects of the show that address urban adaptation to small living spaces, she noted.

"This is an opportunity to gain a perspective on how other people might be living elsewhere," she said. "But most importantly, it's a chance to engage with a hybrid of fiction and reality in exploring the lives of these two people from another part of the world, after they've gone."