China tightens rules on US pork

US pork exporters are coping with a requirement from China, their third-biggest international market, that the products they ship be verified as not containing the additive ractopamine.

Ractopamine is an additive fed to US-raised swine to produce leaner meat. It is a beta-agonist, a class of substances that studies have found to cause side effects in humans such as anxiety, high blood pressure and increased heart rate. China has banned beta-agonists in animal feed and animal products since 2011, after people became sick in incidents traced back to ractopamine.

According to Michael W. Fox, a veterinarian and animal-rights activist in the United States, 166 other countries and regions, including the European Union, also prohibit ractopamine in animal feed and animal products.

The substance is allowed in 24 countries, including for beef and pork products in major producers such as the US and Brazil. Russia on Feb 11 announced the suspension of US pork and beef imports until it can be shown that they are free of ractopamine.

Authorities in China, which is the world leader in both pork production and consumption, have said imports of pork from the US will be halted unless producers there can certify that their products contain no residue of ractopamine.

The US Meat Export Federation has asked Chinese authorities to delay implementation because its members weren't given enough notice of the new requirement and some shipments now in transit won't meet it, Bloomberg News cited the industry group's Asia-Pacific vice-president, Joel Haggard, as saying on Wednesday.

The US Department of Agriculture has officially asked for more information from China about the documentation that would satisfy the requirement, but it hasn't received a response, Dow Jones Newswires quoted an agency official as saying on Friday.

"The new factor that we are struggling with is the requirement that the product arrive with a negative test for ractopamine that would have some type of certifications with it, and that is a new requirement," Joe Schuele, a spokesman for the USMEF, told China Daily.

"Pork that was shipped to China previously did need to be free of ractopamine, but it was subject only to random testing by Chinese officials and didn't need to have any special paperwork with it," he explained.

"We are trying to get some clarity from the regulatory body in China as to what they would accept" as verification, Schuele said. "Can we send [samples] to a private lab or can the importer have them tested at the warehouse? We are trying to get answers on those things and that's why a deadline extension would be very helpful because we do think there might be solutions."

The industry official said it's too soon to tell what impact the new Chinese requirement may have on US pork imports.

"The United States and Chinese governments are talking, and we are confident that we will continuously be able to supply China with pork," said Dave Warner, a spokesman for the National Pork Producers Council. "A significant amount of pork is produced in the US without ractopamine, so we are able to continue to send pork to China."

China is the third-biggest market for US pork as measured by volume and fourth-biggest in terms of value, according to the meat exporters group.

Last year was the second-best year ever for US pork exports to China, Schuele said.

Smithfield Foods Inc, the No 1 US pork exporter to China, said in a Feb 21 news release that it is "well positioned to meet rising demand for ractopamine-free pork".

Virginia-based Smithfield, which shipped about 1.1 billion pounds (499 million kilograms) to China in 2011, said it has been supplying ractopamine-free pork to export customers "for some time". The company added that its plant in Clinton, North Carolina, has been 100 percent free of the additive since 2012 and is a regular source for exports.

Also, Smithfield said conversion of another North Carolina plant would be completed in time to comply with the March 1 implementation of China's requirement.

Adding ractopamine to their diet causes hogs to grow more muscle and less fat, making them more profitable to raise as food, said Jiang Honglin, a professor in the Department of Animal and Poultry Sciences at Virginia Polytechnic Institute and State University, known as Virginia Tech.

"Meat from ractopamine-fed pigs should be safe for humans to consume as long as it does not contain more than the amount of ractopamine residue approved by the relevant food-safety regulatory body," he said. 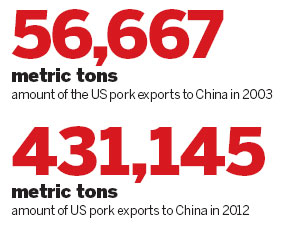