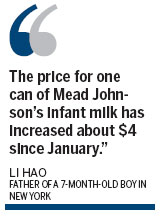 New York retailers said sales of powdered baby formula have been rising, although it's unclear if the increased demand is linked to export limits in Hong Kong, New Zealand and Australia to two cans per consumer.

The Hong Kong measure was taken to limit visitors to two cans of milk powder when they return to the mainland. Hong Kong authorities have arrested 25 people in the three days following the Friday implementation of the new regulation.

In New York's Chinatown, where many Chinese people say they buy milk powder for people back in China, shop owners said business is growing, but that there is little impact from the export restrictions in Asia.

Michael, who works at the Yuan Kang pharmacy at Hester Street and refused to give his surname, said they used to sell three different brands of infant milk powder.

"We only have three cans of one brand left," he said, adding that his pharmacy normally doesn't stock a large amount of infant milk powder.

Demand in China for foreign infant milk powder is running high after a series of milk safety scandals on the Chinese mainland in recent years. Chinese parents have reportedly been asking their family members who are living overseas to ship milk powder and baby food.

Those without international connections are willing to pay more to purchase foreign milk powder online.

The owner of Teng Fei Express Inc who wanted to be identified by his surname Li, said his parcel business has grown rapidly over the past two years.

Located in New York's Chinatown, his main business is to help consumers send goods from the US to the Chinese mainland. Li said he used to help consumers buy milk powders from pharmacies and wholesale stores, but had to give that up because he's been too busy.

His express delivery service receives more than 40 packages a day and a large amount, he said, are packages of milk powder.

"The restriction in Hong Kong may have caused more purchases in the US," Li said.

"The restriction definitely has an effect on the US market," Li said. "The price for one can of Mead Johnson's infant milk powder has increased about $4 since January."

According to Chinese customs, China imported 472,000 metric tons of milk powder in the first eight months. The value was $2.1 billion, rising by 17.6 percent year-on-year.

New Zealand, France and the US were the top three sources of imports, accounting for 77.8 percent, 3.8 percent and 36 percent.

The imports of formula milk were 58,000 tons at a value $660 million, the second-largest market in the world after the United States. They were mainly from the Netherlands, New Zealand and Singapore.