China's "brain drain" continued to be in reverse last year.

More than 272,000 students returned to the country after studying overseas, the Ministry of Education said.

The top two reasons for students returning are more economic opportunities and career development, according to the Center for China and Globalization and Mycos, a consulting firm.

US will be the No 1 M&A target

In 2012, there were 40 M&A deals valued at $11.1 billion involving Chinese companies in the US, which, after Canada, is the second-largest destination for China's M&A capital, according to data from the company.

"Because of the strong capability in high-end manufacturing, competitive energy prices in the US, the strong support from local governments and the huge potential of the consumer market, the US is quite attractive for Chinese investors," said Peng Yali, director of research with KPMG's Global China Practice.

US pork exporters must certify that products they ship to China don't contain residue of an additive that studies have found causes side effects in humans such as anxiety, high blood pressure and increased heart rate.

The requirement, which took effect on March 1, bans the additive ractopamine, fed to US-raised swine to produce leaner meat. China has banned the additive in animal feed and animal products since 2011.

China, which is the world leader in both pork production and consumption, is the third-biggest international market for the US.

The US Meat Export Federation has asked Chinese authorities to delay implementation of the requirement because it said its members weren't given enough notice and some shipments now in transit won't meet it, according to Bloomberg News.

The US Agriculture Department has asked for information from China about documentation needed to satisfy the requirement, but it hasn't received a response, Dow Jones Newswires quoted an agency official as saying on March 1.

"The new factor that we are struggling with is the requirement that the product arrive with a negative test for ractopamine that would have some type of certifications with it, and that is a new requirement," Joe Schuele, a spokesman for the USMEF, told China Daily.

China is again No 2 when it comes to the most billionaires on Forbes magazine's annual list of the world's richest people.

Zong Qinghou(pictured below), 67 and head of beverage giant Wahaha Group, regained the title of richest man on the Chinese mainland. Zong ranked 86th on the Forbes list with a net worth of $11.6 billion, up 60 places from last year. He's the only Chinese mainland billionaire whose net worth exceeds $10 billion this year, according to Forbes.

Economic growth, urbanization and consumer spending have been the main sources of China's growing ranks of super-rich. China is racing to become the world's largest market for the most expensive cars, and will overtake the United States and sell more than 2.3 million premium cars by 2016, according to a report by McKinsey & Co.

Premium-car sales in China reached 1.25 million in 2012, making it the world's second-biggest market after the US.

A fourth of the 1,200 premium car buyers in China who participated in McKinsey's survey said they are willing to spend more on a car because they are confident in their career and business prospects.

China's investment overseas is expected to grow by 15 percent this year, according to The nation's top economic planning agency.

Outbound direct investment in the non-financial sector, which grew 30 percent year-on-year in 2012, is expected to increase by 15 percent this year to $88.7 billion, the National Development and Reform Commission said in a report.

China's growth target for this year is the same as last year: 7.5 percent.

Premier Wen Jiabao announced the target in his last Government Work Report to the National People's Congress in Beijing and also set an inflation target of 3.5 percent, below the 4 percent target of 2012. GDP increased by 7.8 percent in 2012 from a year earlier, a 13-year low.

Wen also called for income distribution reform and the narrowing of the income gap. "We should use the power of consumption to unleash the potential of economic growth," he said.

Wen said the government should be "determined to solve prominent environmental pollution problems" and should take action on safeguarding people's health. (Photo 1)

US leads in clean energy trade

The United States had a $1.6 billion trade surplus in clean energy trade with China in 2011.

The two countries traded more than $8.5 billion worth of clean energy goods and services in 2011, the last year for which data are available, according to the report by the Pew Charitable Trusts.

Qoros with a 'Q' makes its auto debut

Qoros showed its first model at the Geneva Motor Show this week. The four-door compact car, the Qoros 3 Sedan, is aimed at young buyers in China and Europe.

German luxury-vehicle producer Audi AG sought a temporary injunction last week to stop the new independent carmaker from China from using the letter Q, claiming the Qoros name violates its right in using the letter Q on its SUVs. A Geneva court rejected the request and ordered Audi to pay 15,000 Swiss francs ($15,880) in costs to Qoros.

Qoros Auto Co Ltd is a 50-50 joint venture established in 2007 by Chery Automobile, China's biggest automaker by sales, and Israel Corp, the largest holding company in its namesake country. It was the only Chinese automaker at the show. (Photo 3) 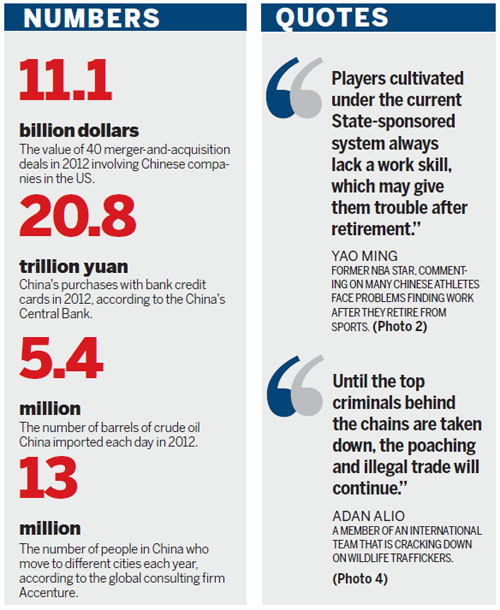