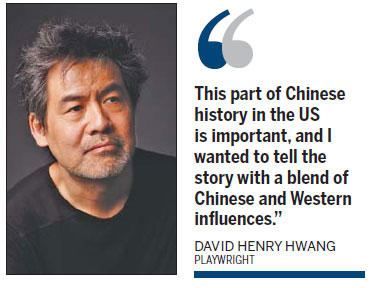 When the playwright David Henry Hwang wrote Dance and the Railroad in 1980, defining and documenting the immigrant identity was for many Chinese Americans a task of serious importance, made more urgent by a perceived position of weakness relative to a dominant culture.

In the intervening years, much has changed. China is no longer the obvious underdog, and some might argue that the art of identity politics has gone out of favor. Hwang has also, in his own words, "grown up".

But his play about two Chinese railroad workers struggling to deal with the ramifications of an 1867 labor strike is a reminder that for more than a century, Chinese in the US were at a marked disadvantage. Originally commissioned by the US Department of Education and now in revival at New York's Signature Theatre until March 17, Dance and the Railroad cautions against simplistic narratives, showcasing a history of immigrant activism that has often been ignored.

"I think it's important to remember that while these Chinese workers were basically indentured students, and faced incredibly difficult circumstances, they still stood up for themselves and were assertive when they were unhappy with their conditions," Hwang said. "In some regards, Chinese-Americans still struggle with this notion of asserting themselves and standing up for their rights, so I think that these characters continue to be useful for us to look at even today."

Dance and the Railroad, which will travel to Shanghai in May, explores the attitudes of two men: Lone, jaded by his three years in the US with a railroad crew he calls "dead men", Chinese who have bowed to the authority of white employers who underpay and overwork them; and Ma, fresh off the boat and susceptible to every far-fetched claim about "Gold Mountain". The two meet on a mountaintop, where Lone has sequestered himself during the strike to practice the martial arts he learned as a young student of Chinese traditional opera.

By the time the play has concluded, Ma (Ruy Iskander of The Public Theater's Measure for Measure) and Lone (Yuekun Wu of Theater for the New City's Love in Tears and Laughter) have staged their own opera about "The American Dream", a play within a play that blends the beauty of Chinese opera with Western naturalism. They have also traded positions in their expectations of what a life on "Gold Mountain" might provide: Ma has decided that ruthlessness is the only path to success in America, and Lone has come to the realization that even without his rage, he still wants to fight - or in this case, dance.

Hwang is Signature Theatre's playwright in residence for one year, a position that has allowed him to stage several of his own plays. His 1996 play Golden Child, which won an Obie Award in 1997 and was nominated for a Tony Award in 1998, recently closed a run at the theatre. Hwang also won a 1988 Tony for M. Butterfly, and his comedy Chinglish ran on Broadway in 2011.

"I hope that audiences will leave with a better appreciation for David's foundation as a writer and understanding of his creative journey as they continue exploring his body of work," said James Houghton, founding artistic director of Signature Theatre. "In Dance and the Railroad, David presents a coming-of-age story that honors the value and power of community. At the same time, he also explores the role of art in our modern world, the strength and devotion required of artists, and the transformative influence art wields to connect us to one another and give our lives meaning."

Huang Ruo, the composer who scored Dance and the Railroad, described the piece as a meditation on the immigrant dream.

"In Lone and Ma's opera, you see that they are fighting, mentally fighting the White Devil, or the mountain, or the unfair treatment they've faced since their arrival. Using all their strength, they fight," he said. "People emigrate to other countries because they have hope. Chinese immigrants have come to US for more than 100 years, and now you see more Americans going to China. I think that's a sign of the curiosity and longing we all feel for something we don't have, or something we don't know. That's what drives people."

Huang recently won first prize in the prestigious Luxembourg International Composition competition, and is renowned for his seamless merging of Western and Chinese influences. In Dance and the Railroad, he mixes instruments from both traditions, including the pipa, flute, piano and different styles of percussion.

"Not very many people know about this portion of Chinese history in America, but it's something we shouldn't ignore," he said.

"That's the beauty of art. When you transform a part of history into an art form, whether it's visual or oral, or through staging, it gives people an opportunity to really understand this part of history while actually engaging in it. Even though the story itself is fictional, these characters represent a real group of people."

Hwang noted that the current production features a new line in which the characters lament that no matter how hard they work, their job is never done.

"I think that in America, the whole economic system is based around keeping us wanting more as a culture," he said. "If we stopped wanting things, we would stop buying things and the market would collapse. Our culture is based on making us feel like we still need more. The job is never done."

In the play, Lone and Ma make fun of the "White Devil" for his wide eyes, appearing as though he has "drunk 72 pots of tea".

Although audiences have reacted favorably to the joke, Hwang says he would not have written the line today.

"A part of me is more uncomfortable with that joke today than I was 30 years ago, because of the relative positions of power," he said. "For the underdog to make fun of the person in power felt more acceptable, but now because things are more equal, it feels wrong. My perspective on China has changed as the times have changed, and I'm older now as well.

"This part of Chinese history in the US is important, and I wanted to tell the story, and to do it with a blend of Chinese and Western influences. For me, this was a beautiful experiment."