Three-year plan has turned area into a thriving commercial hub

After the Beijing government decided to boost the development of the capital's southern sections in 2010, the area has turned into a bustling center of commerce and high-tech and educational institutes.

Having ended their reliance on low-end industries such as cement factories and small coal mines, southern Beijing now has a high concentration of bio-medical industry bases and scientific research institutes.

The southern area spans five districts - Fengtai, Fangshan, Daxing and the southern parts of Xicheng and Dongcheng districts, accounting for 20.5 percent of the city's area. More than 4.6 million people lived in these areas by the end of 2008.

According to the municipal government, the average gross regional product in Fengtai, Daxing and Fangshan districts increased by 11.3 percent from 2010 to 2011.

The local fiscal revenues in the three districts also increased 26 percent, and were 4.2 percent higher than the capital's average fiscal revenue figure.

However, economic development in the southern parts of the city is still lagging behind the northern ones, with fewer high-end industries. The gross product of the Fengtai, Daxing and Fangshan districts is only 15 percent of the city's total.

The southern part of the capital should further attract investment and high-end enterprises, according to the Beijing government.

The "New South Beijing Three-year Plan" (2013-15) has been approved by municipal authorities, according the Beijing Municipal Commission of Development and Reform, which has pledged to invest at least 290 billion yuan ($46.6 billion) in the southern areas.

These areas will focus on a number of strategic projects with the government continuously providing financial, land and policy support.

Rail transportation, the greenbelt along the Yongding River and public service facilities including schools, healthcare centers, elderly care and museums will be at the top of the project's agenda over the next three years, the commission said.

The location of a new airport will also play a major role in the southern region's development, it said.

The Beijing Subway has seen unprecedented construction in the southern area of the capital in recent years, greatly relieving traffic in the city and providing convenience to local residents.

Including three new lines and extensions to existing lines, the subway system in the southern part of the capital now covers 118 kilometers, with 90 km constructed in the past three years.

In addition to the subway, six roads, spanning 167 km, are also being built to connect the southern area with downtown, including Jingliang Road and Puhuangyu Road.

Four forest parks have been set up in the past three years in the southern part of the city. Residents can camp or stroll in the parks free of charge.

More than 4,000 hectares of barren land in southern Beijing has been turned into fields covered with grass and trees in the city's afforestation project.

A total of 31 major environmental protection projects have also greatly improved the air and water quality.

The zones attracted more than 200 projects with a total of 120 billion yuan of investment in the past three years.

The southern areas will play a significant role in dispersing the capital's exploding population, the government said. 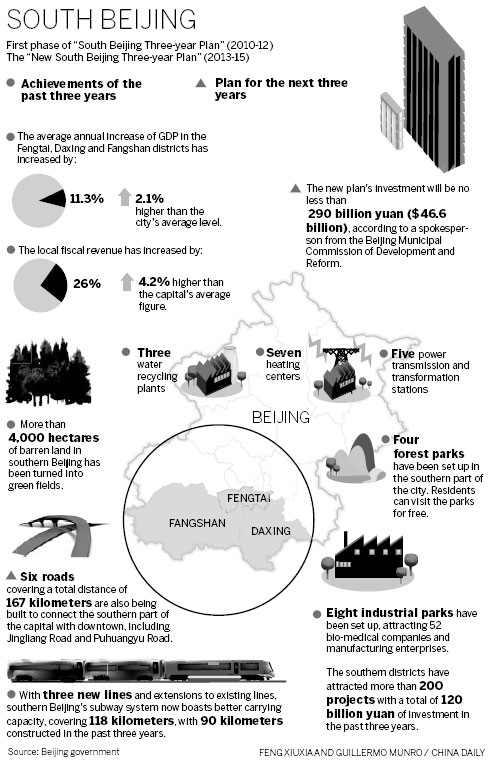