Reforms moving with the times 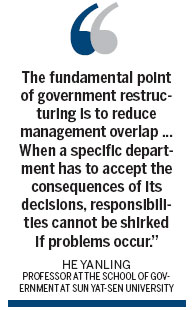 The State Council has unveiled a series of changes designed to reflect recent changes in society and maximise administrative efficiency. Report by Hu Yongqi, Lan Lan, and Fu Jing in Beijing

As China's new leadership prepares to take charge, the nation has embraced the opportunity to deepen administrative reform by transferring power from the government to market forces and public opinion, via a restructuring plan announced by the State Council on Sunday.

The move is the latest step in an ongoing, long-term transition. In 1981, the central government comprised 100 ministries and departments that employed 51,000 officials. Since 1982, there have been six major rounds of government restructuring and staff reductions, occurring roughly once every five years. As a result, only four government departments have not seen their names change in the past three decades, while the average State Council department has gone 13.6 years between major reshuffles, said He Yanling, a professor at the School of Government at Sun Yat-sen University in Guangzhou.

"There are now fewer departments involved in economic management and there is greater focus on social management. The focus of the departments has also shifted from control to regulation," she said. After the reforms, the 27 departments of the State Council will be reduced by two to 25.

By streamlining the way it functions, the government is on track to further transform its role by allowing the market to play a bigger role in economic activity, said Chi Fulin, an economist and director of the China Institute for Reform and Development in Haikou, the capital of Hainan province.

For many years, the government-dominated economic growth model saw strong GDP as a top priority and invested heavily to achieve that result, resulting in an imbalance between investment and consumption and other issues such as overcapacity, resource waste and environmental pollution, he said.

To change the situation, a clear boundary has to be set between the market and the government, monopolies have to be broken, and the process of administrative approval needs to be simplified, he added.

Meanwhile, the central government needs to strengthen its function as a watchdog, to implement and enforce strict regulations to supervise the market, especially in areas such as food safety and employment, said Jia Xijin, a professor at the School of Public Policy and Management at Tsinghua University.

That view was echoed by He in Guangzhou. "The fundamental point of government restructuring is to reduce management overlap and allow each department to take control of its own field," she said. "When a specific department has to accept the consequences of its decisions, responsibilities cannot be shirked if problems occur."

Previous reshuffles were governed by the same logic. In 1993, steps were taken to increase the power of the market after former leader Deng Xiaoping vowed to build a "socialist market economy" on his tour of South China in 1992, said Zhao Chenggen, a professor at the School of Government at Peking University.

However, by 2008, several ministries in the industrial sector were obstructing market forces and their influence needed to be either removed or reduced so that the market could play its role efficiently, said Zhou Zhiren, also a professor at the School of Government at Peking University.

That led to the establishment of the Ministry of Industry and Information Technology and the disappearance of two other ministries in the industrial sector. As part of a series of reforms in 2008 - the most recent of the six previous reshuffles - three departments were merged to create the National Energy Administration to tackle China's soaring energy demand.

These reductions and mergers inevitably led to a reduction in staff. The reforms of 1982 saw 39 ministries and departments cut, resulting in 21,000 officials leaving the central government payroll.

In 1998, the State Council was further streamlined, and approximately half its employees were moved to other departments and State-owned enterprises, resulting in lower administrative involvement in economic matters.

While the earlier reforms were driven by domestic market forces and the need for China to become more integrated with the global economy, the country can still learn the lessons of history, especially the experiences of Japan in the 1980s, said Bai Zhili, associate professor at the School of Government at Peking University.

At the time, Japan's economic and market control was highly bureaucratic and government involvement pushed forward the nation's economic takeoff, he said.

However, when the economy stopped growing in the 1990s, Japan's central government was forced to relinquish some of its power to local governments and privatize state-owned enterprises to stimulate the market. The reforms successfully prevented further economic deterioration, he said.

In addition to the market, there is also society. As social networking platforms such as micro blogs become more popular in China, the government will need to update the administrative model and pay greater attention to public opinion as a means of sustaining social stability and harmony, said Chi Fulin.

The government needs to further open the public services sector and encourage social forces, such as NGOs, to participate in the provision of public services. A dialogue mechanism should also be established to strengthen communication between government and society at large.

Public expectations for better living standards now revolve around high-quality housing, a higher standard of education and cleaner air, a much more demanding set of priorities from 20 years ago, when most people simply wanted warm housing and sufficient food, said He.

Departments providing social services accounted for 35 percent of State Council departments in 2007, while it was less than 30 percent in 1982, she said.

China still has much to learn about social management. "It seems to be more important than just financially helping some poor families. The government has to be able to use the funds collected through taxation to benefit the entire population," according to Jia at Tsinghua University.

The reform of government still has a long way to go. "Putting power in the cage of regulations" will require the government to become more open and transparent, said Chi.

Also, the ambiguous boundaries between the powers of the decision-makers, the administration and monitoring unit could be a breeding ground for corruption, he said.

While the government has set a target of completing the new administrative system by 2020, it has to push the process forward gradually in the coming years, Chi added.

The fresh round of administrative reform will upgrade China's role as a magnet for global investment and a destination for exports, according to the founder of a leading European consultancy on political strategy and policy development.

Greater streamlining of government institutions would help increase the global presence of Chinese businesses, said Peter Guilford, executive chairman of the g+ consultancy, which operates from offices in London, Brussels, Paris and Berlin.

"We are quite convinced that the reforms are a move in the direction of releasing the sustainable potential of this huge economy," Guilford said, adding that a more efficient and clear administrative central government structure would further improve investor confidence and provide reassurance. To that end, he said, his company will establish branches in Beijing and Shanghai in the near future.

Zhang Yuchen in Beijing and Liu Jia in Brussels contributed to this story.