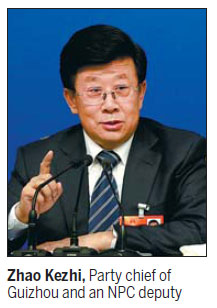 Poverty-stricken Guizhou province will push its own style of industrialization and urbanization to realize its goal of building a prosperous society by 2020, authorities said.

"The province is mountainous. Therefore, we do not give priority to developing big cities with large populations and tall buildings like many economically developed regions in East China," Governor Chen Min'er, a deputy to the National People's Congress, said in Beijing on Tuesday.

Instead, developing smaller cities and towns with local characteristics will be the direction of the province's urbanization, he said during a news conference on the sidelines of the annual session of the NPC.

"At present, a work team has been sent to visit 17 ethnic groups in the province to collect special local architectural elements. We expect to use those strong ethnic building characteristics in the process of future urban construction," Chen said.

"We hope people outside the province can recognize our cities and towns at first glance, since they have Guizhou characteristics," he said.

The southwestern province promised to accelerate sound and rapid economic development over the next decade as a major effort to catch up with more economically advanced provinces and regions.

In 2012, the State Council announced the further promotion of sound but rapid economic and social development in Guizhou in a document outlining a series of policies allowing the province to protect its ecology, strengthen industrialization and urbanization, and accelerate economic development.

To realize such an ambitious goal, a series of construction plans has been carried out this year - including 100 industrial zones and 100 small towns - as major platforms to attract investment and improve the province's rate of urbanization.

Around 11.5 million people in Guizhou lived below the country's poverty line of 2,300 yuan ($370) last year, accounting for 11.6 percent of the national total, according to the provincial government.

Authorities said an overall economic boost will help lift them out of poverty by 2020.

For example, the province has set an annual GDP growth target of 14 percent over the next five years, compared with 12.8 percent in 2012, according to the provincial government.

The private sector will account for 55 percent of the province's economy by 2017, up from the current 41 percent.

The province's urbanization rate will be pushed to 47 percent in 2017 from the current 36.5 percent, according to the provincial government.

Zhao Kezhi, Party chief of Guizhou and an NPC deputy, said the province will stress the development of industries with local characteristics, such as tourism, wine and tea.

"Meanwhile, environmental protection and pollution control will be strengthened at the same time as the province is stressing economic growth," he said.

Industries that have little negative impact on the local ecology will be encouraged to develop in the province, and all projects will receive strict environmental assessment before being launched, Zhao said during the annual NPC session.