After rights to the franchise of Emmy-nominated musical/reality phenomenon American Idol were sold to more than 100 countries, the Chinese version began recruiting talented singers in China and the United States.

The show, which premiered on US network Fox in 2001, will launch on China's Dragon TV. It will be the third Chinese adaptation of a foreign singing-competition show, after The Voice (NBC) and The X Factor (Fox).

According to Shanghai-based Dragon TV, Chinese Idol will start recruiting qualified singers in 42 cities on the Chinese mainland and in foreign cities including New York, Los Angeles, Sydney and Vancouver. The channel will begin airing the Chinese version on May 19 in prime time.

Dragon TV has joined with ICN, a bilingual channel in North America, to attract potential superstar singers from the US.

"We have more than 50 participants so far since registration began two weeks ago," said Bernice Zhao, an ICN marketing executive.

She said applicants were born between 1985 and 1997, with a mix of Chinese citizens and Americans of Chinese descent. The first-round walk-in competition will take place on April 14 in Los Angeles. 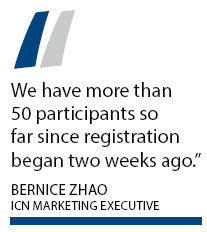 In the past decade, American Idol has launched the careers of singers including Kelly Clarkson, Adam Lambert and David Cook. The celebrity judges for the show's current 12th season are Mariah Carey, the best-selling female recording artist of all time; Grammy-winning producer Randy Jackson; singer Nicki Minaj; and country star Keith Urban.

As for who will judge Chinese Idol contestants, a conference in Shanghai will soon be convened at which key details will emerge. The highlight will be the disclosure of what are expected to be four names well-known in China.

Officials at Dragon TV said Chinese Idol will provide a stage for young people to pursue their vocal dreams, with those showing the most potential to become an "idol" having the best chance to win. Once winners are selected, Dragon TV owner Shanghai Media Group will provide them opportunities to work in show business full time.

Created by producer Simon Fuller, first in his native Britain as Pop Idol, and produced by Los Angeles-based 19 Entertainment, the show has been the No 1 entertainment program in total US viewers for the past nine seasons. According to the American Idol website, the show's alumni have recorded more than 300 Billboard No 1 hits and generated almost 250 million downloads on iTunes.

In China, there have been rumors that collaboration on the forthcoming show involves soccer superstar David Beckham, who recently visited the country with Fuller. Reports said Fuller met officials from Dragon TV during his stay in Beijing before the agreement on the new show was reached.