The acquisition of Canada-based Nexen is a major step to diversify geographically, while increasing oil and gas reserves, reports Zhang Yuwei from New York.

In an auditorium in late February at the headquarters of oil and gas company Nexen Inc in Calgary, Alberta, two Chinese oil company executives sat on the stage. In front of them, more than 1,000 people, who the day before were employed by Nexen. Now they worked for the two men on the stage who oversee the third-largest oil company in China. And the question on their minds was, "What's next?"

The two CNOOC Ltd executives were Chairman Wang Yilin and CEO Li Fanrong. To the gathered employees, about one-third of Nexen's workforce, Li gave them answers:. Nexen would remain autonomous; CNOOC would keep Nexen's head office in Calgary, retain the some 3,000 employees at their current salaries, list shares on the Toronto Stock Exchange and continue Nexen's community and charitable programs.

The meeting was the first introductory session by CNOOC (China National Offshore Oil Corporation) for employees from Nexen, which became a wholly owned subsidiary of CNOOC in a $ 15.1 billion deal - the largest overseas acquisition by a Chinese company ever. "It was well received," said a Nexen employee who attended the town-hall session, describing it as "exciting and interesting."

Industry experts see the Nexen deal as a major step by CNOOC to diversify geographically, which Chinese oil and gas companies have been doing since 2009 by purchasing assets in the Middle East, North America, Latin America, Africa and Asia. The acquisition will increase CNOOC's oil production by about 20 percent, which was between 341 million and 343 million barrels oil equivalent in 2012, and reserves by 30 percent, said CEO Li. 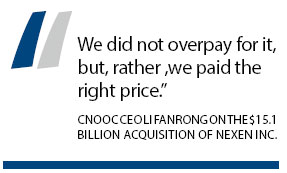 "CNOOC has the opportunity to roll up its sleeves and maximize Nexen's ability to break down heavy oil through technological advancement," he said. "CNOOC needs to beef up exposure to clean fuels, especially since coal is still rather dominant in China, so while the Nexen deal makes sense, the company needs to not make the same mistakes as the US and become too focused on one or two energy sources."

The largest overseas acquisition by a Chinese company was first announced in July. Canadian regulators approved it in December. In February, the Committee on Foreign Investment in the United States (CFIUS), which reviews sensitive deals by foreign investors in the country, signed off on the deal's part involving Nexen's assets in the Gulf of Mexico.

"The one-year acquisition process was filled with hardships," CNOOC Chairman Wang recently told the Shanghai Securities News. "Its success has big significance and value to the company."

Kevin Reinhart, an 18-year Nexen veteran who served as interim CEO for the company since last January, remains in charge. Nexen formed a new board chaired by Li, and with members from both companies, including Reinhart.

CNOOC's keeping Nexen autonomous is one of the main reasons the company's workers aren't anxious about the takeover, said Reinhart.

Nexen's oil-sands assets in Canada, the United Kingdom, the North Sea and offshore West Africa will be managed from its Calgary headquarters, as will about $8 billion worth of CNOOC's North and Central American assets, said Patti Lewis, Nexen's spokeswoman.

"For Nexen, it means immediate growth," said Lewis. The Chinese company's financial backing and other support will allow Nexen to "realize the full potential of its opportunities."

"Both companies share many of the same goals and values," she said. "I think our two cultures will help to reinforce each other and make the combined company an even better one."

CNOOC will seek to retain Nexen's current management team and employees and will provide compensation that is not less than what it was before the transaction, Lewis said of the commitments the Chinese made.

CNOOC's CEO Li said the deal is worth the price. 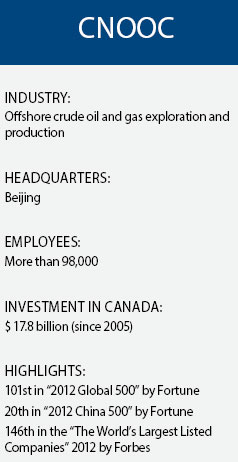 "We did not overpay for it, but, rather,we paid the right price," Li told the Shanghai Securities News, adding that the asset is in accordance with CNOOC's "long-term strategy and the price conforms to the level of the industry."

The two companies had formed a relationship before they announced the deal. In 2011, CNOOC acquired Opti Canada Inc, Nexen's partner in the Long Lake oil-sands project. That year, the two set up a joint venture in the Gulf of Mexico, which gave CNOOC a working interest in up to six deep-water exploration wells in the Gulf.

CNOOC's Li said following the Nexen acquisition that the company will focus on developing the "full potential of Nexen's resources" and will refrain from any big deals in the oil patch "in the very short term". He said that CNOOC won't develop shale gas in the near future as some speculated.

Canada has been a popular investment destination for major Chinese oil and gas companies. Until the Nexen deal, CNOOC had invested $2.7 billion in Canada since 2005.

With its rich natural resources, the country has attracted an average of $12 billion annually in the past three years, according to the Bank of Montreal. With the Nexen deal, China's investment in Canada will have surpassed $25 billion in 2012, according to the bank, making China the fifth-largest foreign investor.

With a population of slightly more than one million, Calgary, situated on Bow River in the south of Alberta, has had many foreign investments in oil and gas projects in particular.