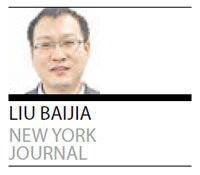 After three statements over the course of two weeks in which it was scolded by Chinese authorities, media and consumers, Apple Inc seems to have won some understanding after the company apologized for certain practices.

The California-based electronics giant said on Monday that it was sorry for conduct that left the impression it was "arrogant or inattentive" in the face of public complaints that some warranty and service policies discriminated against Chinese customers. It also promised to change some policies and said it would work to improve customer communications in China, including improved training of third-party sellers and servicers.

The case of Apple, one of the world's biggest consumer-products companies, offers lessons in customer service for other multinationals that do business in China and other big markets.

One thing is the need to establish a network for customer service and support.

China, with GDP of $8.3 trillion and the fastest rate of growth among the world's major economies last year, is an increasingly important profit center for many US companies including top brands like Boeing, Starbucks and Coach.

Since Apple started to sell iPhones in China officially in 2009, the world's most populous country has become a key market for the gadget maker.

Apple sales in China in its 2010 fiscal year were just $2.76 billion; two years later, the number had jumped to $22.80 billion. The United States and China are the only two national markets that contribute to more than 10 percent of Apple's revenues. In the fiscal first quarter that ended on Dec 29, China accounted for 13 percent of Apple's total revenues.

Since 2008, the company has opened eight stores in China. Considering that they are the main point of face-to-face contact with consumers, eight isn't nearly enough to service a business that generates nearly $7 billion in sales in one quarter. That means the company has to rely on local vendors.

At the center of the recent criticism Apple faced in China involved underdeveloped infrastructure. Some Chinese consumers claimed that, in the US and other countries where it operates, Apple replaces iPhones that are eligible for return, though in China the devices either aren't replaced or customers must pay for part of the replacement.

Another complaint was that Apple provided only a one-year warranty on its MacBook Air notebooks and major computer components in China, even though Chinese law requires two-year warranties.

As was explained later, it can take a long time for a customer to get an iPhone fixed. In line with other phone makers' practices, Apple will replace with a new phone that includes a reused cover because the turnaround time is reduced. The US company says on its website that warranties conform to Chinese regulations, which means two years for components, but few people at Apple had been told of the policy.

The second lesson for Apple and any multinational company operating in a foreign market is effective and timely communication.

The company issued a statement on March 16, the day after a critical broadcast on China Central Television. Apple said only that it was committed to providing world-class products and service.

A week later it explained policies for the iPhone4 and iPhone 5, but Apple maintained its consumers, including in China, enjoy the highest standard of service. That struck many in China as self-serving and tin-eared.

Reporters in China who contacted Apple's PR representatives were generally referred to the statements.

Apple spokespeople in China, who follow corporate disclosure policies worldwide and had to wait for guidance from the head office in California, didn't note the misunderstanding over service terms and warranty periods, leaving dissatisfied customers in the lurch - at least until Monday's apology, which was signed by CEO Tim Cook.

Finally, Apple and other multinationals often talk of the importance of local partners in foreign markets, but the real test comes when a wave of bad publicity hits.

Apple, through its main Chinese manufacturing contractor, Foxconn Technology Group, is indirectly one of the biggest employers in China. Foxconn, also known as Hon Hai Precision Industry Co, employs 1.2 million people on the Chinese mainland; a large percentage of these workers make iPhones and iPads.

Each of Foxconn's factories in China employs more than 100,000 people .

The factory in Zhengzhou, Henan province, exported $29 billion last year, almost 60 percent of all exports from China's most populous province.

Cook visited Zhengzhou a year ago, where he was received by then vice-premier Li Keqiang, who is now premier. Li said at the time that he welcomed Apple's role in the development of China's central and western regions.