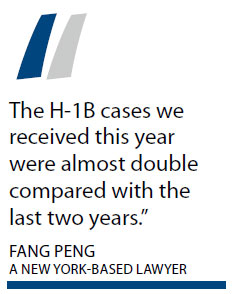 Dong Jie is a 27-year-old Chinese student who graduated in 2012 from the University of Southern California with a master's degree, and is working as a software developer at SAP, a Palo Alto, California-based software company

Now he's one of thousands of international students in the US in hot pursuit of an H-1B work visa.

"I am a little worried about whether I can get an H-1B visa," he said . "But I believe I have big chance to get it even if the number of applications exceed the cap limit," he said.

The application period for the work visa opened on April 1 and continues until April 5. The congressional-mandated quota is a maximum of 65,000 H-1B work visas for the fiscal year 2014 beginning Oct 1. Another 20,000 H-1B visas will be awarded for those with masters or higher degrees from US academic institutions by US Citizenship and Immigration Services, which processes the applications.

Last year, the visa quota was reached in June, but it's expected to quickly hit the limit this year, which would trigger a lottery of all the cases filed in the five-day filing window. That also would signal that companies feel confident enough about the economy to hire more foreign workers.

CIS plans to announce by the middle of next week if it will hold a lottery .

Cases not selected in the lottery will be rejected, and the filing fees won't be cashed.

It costs about $1,820 for a H-1B petition, which includes various fees.

After the recession hit the US job market in 2008, a lottery wasn't conducted for three years. Last year, the government issued 129,000 H-1B visas, almost double the official quota.

Many US companies, especially in technology, say they need the successful visa applicants to fill vacant positions. Some unions maintain that companies use the visa program to hire lower-paid foreign workers.

The US Congress is working on immigration reform legislation, and is considering a revamp of the H-1B program that may raise the quota based on demand and eliminate the lottery.

Fang Peng, a New York-based lawyer whose office handles visa applications, said a huge group of international students will compete for the H-1B visa this year. "The H-1B cases we received this year were almost double compared with the last two years," he said.

Fang said he thinks the US economy has recovered because of the high number of H-1B cases his firm has handled this year. He also noted that instead of clients initiating the visa paperwork in February, they did it right after Christmas.

Raymond Wong, also a New York-based lawyer, said CIS should provide more work opportunities for international students because they help to boost to US economy.

International students contributed more than $22.7 billion to the US economy in the 2011-12 academic year, according to the US Department of Commerce.

The highest number of international students registered at US academic institutions were Chinese, according to a November 2012 report by the Institute of International Education and the US State Department.

Yang Fan, a 23-year-old senior at American University in Washington, said she used to worry about finding a job when she graduates this summer, but now she's more concerned about getting an H-1B visa for the fiscal year 2015.

"It is so sad to know that I may not be able to work even if I can find a job," Yang said. "I don't like the idea that my fate would be decided by a computerized draw of lots."