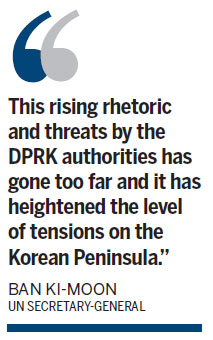 The Democratic People's Republic of Korea's announcement Tuesday that it would reopen a shuttered nuclear reactor able to produce bomb-grade plutonium immediately drew criticism from the international community, with Beijing expressing regret while calling for calm and restraint.

"The situation on the Korean Peninsula is complicated and sensitive," said Hong Lei, Foreign Ministry spokesman. "China's persistent position is to realize the denuclearization of the (Korean) Peninsula."

Hong called for a resumption of dialogue with the DPRK to resolve the issue.

The DPRK's state-run Korean Central News Agency reported that the nation's atomic energy department intends to "readjust and restart all nuclear facilities" at a nuclear complex in Yongbyon, 90 kilometers north of the capital of Pyongyang.

The facilities include a uranium enrichment facility and a reactor that was disabled under an agreement reached in 2007 during the Six-Party Talks.

In Washington, where US Secretary of State John Kerry was meeting Republic of Korea Foreign Minister Yun Byung-se, Kerry described the recent DPRK posturing as "provocative, dangerous and reckless". He vowed that the US will do "what's necessary" to defend itself and its allies - the ROK and Japan - from DPRK threats.

Kerry will visit Seoul next week and ROK President Park Geun-hye will visit the US in early May.

He said the DPRK decision is "a direct violation" of the country's international commitments and a "very serious step". He added that China has "such an important role to play" in urging the DPRK to denuclearize.

Ted Galen Carpenter, senior fellow for defense and foreign policy studies at the Cato Institute, a Washington-based think tank, said the latest move from the DPRK could "annoy Beijing".

"Pyongyang has apparently adopted a strategy of ignoring China's warnings and advice," said Carpenter, referring to warnings from Beijing regarding the country's satellite launch in December and a nuclear test in February.

"Chinese leaders cannot be happy about such behavior, especially when it raises tensions in the region - something that is clearly not in China's best interest," Carpenter said.

Former Australian prime minister Kevin Rudd said on Tuesday in a speech in Washington that he was encouraged during a recently concluded trip to China upon hearing increased criticism of the DPRK.

"In China itself now, the North Korea debate has gone from being a private debate to a very public debate" since Pyongyang stepped up weapons tests as well as threats of war, Rudd said after his speech at the Carnegie Endowment for International Peace.

"China wants to be respected in the world - not just being a big great power but being a respected great power. This has sunk into the Chinese foreign policy psychology," Rudd said.

ROK's Yun renewed his country's commitment to working with Washington.

"We agree to further strengthen credible and robust deterrence vis-a-vis North Korea's nuclear and conventional provocations," said Yun, on his first visit to Washington since taking office under President Park.

The foreign minister also said ROK will make sure UN Security Council Resolution 2094 is fully implemented. The resolution was unanimously adopted to impose additional sanctions on the DPRK in response to its Feb 12 nuclear test. The resolution is the fifth since 2006.

UN Secretary-General Ban Ki-moon said at a news conference in Andorra that he was "deeply concerned" about the situation on the Korean Peninsula.

"This rising rhetoric and threats by the DPRK authorities has gone too far and it has heightened the level of tensions on the Korean Peninsula," Ban said.

The risk of a flashpoint is running high on the Korean Peninsula, Chinese experts said.

"What we must be cautious of is accidental events that might be misread, resulting in a firefight or even larger disasters," said Huang Youfu, a professor of Korean studies at Minzu University of China. He said chances are slim that Pyongyang will launch a planned attack against the US.

Mutual distrust is the fundamental reason for the deteriorating situation on the Korean Peninsula, Zhang Xudong, an expert on the DPRK at Tsinghua University, said recently.

"Neither military confrontation nor saber-rattling will lead to breakthroughs in resolving the nuclear issue on the Korean Peninsula. All parties should stick to diplomacy and dialogue," he said.

Carpenter, however, said the DRPK's move this time is "more symbolic than substantive" and more of a way "designed to get attention from the United States and the rest of the international community".

"It would take many months, perhaps even more than a year, for that reactor to become fully operational again," Carpenter said.

He said if the DPRK took concrete actions, such as redeploying its forces closer to the Korean Demilitarized Zone or closing the joint industrial park with the ROK, the situation would become more worrisome.

"It's uncertain whether the US will seek further UN sanctions, but Washington and Seoul will probably step up their mutual defense preparations," said Carpenter, citing the US' Sunday deployment of F-22 fighters to ROK as part of their joint military drills.