The boarding program opened on Wednesday with 43 students from more than 11 countries, including China, in San Mateo, California, at the newly renovated Benjamin Franklin Hotel, which was purchased in 2011 by Draper, founder of the global venture-capital firm Draper Fisher Jurvetson (DFJ Fund).

The ability to survive constant change and solve future problems are among the hallmarks of the program, according to Draper.

"As an entrepreneur, one will always encounter challenges and need to adapt quickly," he said.

"By the time our students finish the program, they will understand what it is to become entrepreneurs and have the tools within them to do it."

The Draper family is known for its success in venture capitalism. Tim's father Bill Draper initiated the first private venture-capital firm on the West Coast in Palo Alto, California, in the early 1970s.

Father and son are known for some of their highly profiled investments such as Baidu Inc, the China-based Internet search engine, and Skype, an Internet-based telephone service provider.

According to Tim Draper, the program will include teaching startup fundamentals, and feature events that connect the students with the entrepreneurial world of Silicon Valley. 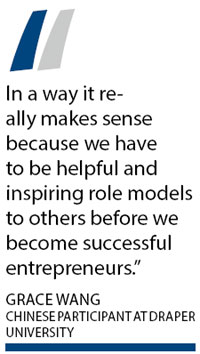 Professional speakers will lecture on the future of energy, medicine and transportation, and there will be standard courses in accounting, law, investment skills and working with venture capitalists.

Draper said the program received many applications and only those who are extremely self-motivated were accepted. "We look for someone who has a global vision and an ambition," he said. "You can't really teach entrepreneurship spirit to a person. Either you have it, or you don't."

Grace Wang, the only Chinese student, said she feels very lucky to be part of it.

"We are taught to think about the future, learn how to change the world, and ask ourselves what we can do for the world," said Wang.

"We are asked what kind of person we want to be first, and entrepreneurship comes next. In a way it really makes sense because we have to be helpful and inspiring role models to others before we become successful entrepreneurs."

She said she wants to start a business that would develop strategies to help China's economy to continually grow and improve the standard of living globally.

Draper said China is at the top of his list for expansion of the school.

"Once we establish a mature and steady program in the US, we will launch in China," he said.