Hours after US President Barack Obama and first lady Michelle Obama attended an interfaith service on Thursday at a Roman Catholic cathedral in Boston to remember victims of the Boston Marathon explosions, the FBI released photos and a video of two men it called suspects in the bombings and asked for the public's help in identifying them.

FBI Agent Richard DesLauriers said one of the suspects is believed to have planted a device outside a restaurant near the finish line of the race. He said both suspects are considered armed and extremely dangerous.

Obama told the memorial service that "we will find" whoever carried out the attack that killed three people and injured more than 170 people in a crowd of thousands at the finish line of the world-famous marathon on Monday. He also said that Americans would not be intimidated by the twin blasts.

"If they sought to intimidate us, to terrorize us, to shake us from those values ... that define us as Americans, it should be pretty clear by now that they picked the wrong city to do it to. Not here in Boston," Obama said at the memorial.

US Secretary of State John Kerry said in a statement on Thursday that the State Department has been in contact with the family of Lu Lingzi, a Boston University graduate student from China who was one of the three killed by the explosions.

"We stand ready to provide whatever appropriate assistance we can to the family members of foreign nationals in the aftermath of this despicable act of terror," Kerry said.

It took only 10 minutes on Wednesday for the Campaign for Boston University Board of Trustees to raise $560,000 for a scholarship in memory of Lu.

"We are grieving and at a loss for words to describe the pain and sadness we are experiencing following the sudden passing of our dear daughter, Lingzi," Lu's family said in a statement given to Boston University. "She was the joy of our lives."

BU trustee Kenneth Feld spearheaded the Lu Lingzi Scholarship Fund that was raised in response to thousands of offers to help from alumni, friends and others around the world. The seven-member committee raised funds on Wednesday and created the scholarship in accordance with the preferences of the Lu family, who will be traveling to Boston this week from their home in Shenyang, China.

Lu started at BU last fall to study statistics. Friends and teachers remember the 23-year-old for her smile, piano playing and love of food, which she enjoyed posting photos of on Facebook.

Monday's tragedy sparked a huge outflow of grief among students of the class of 2014, the year Lu would have graduated. More than 6,000 members of the BU Alumni Association used social media to express their condolences, according to a report in the school newspaper, BU Today, and more than 100,000 users of Weibo, China's version of Twitter, mourned her death, according to the New Yorker magazine's website. 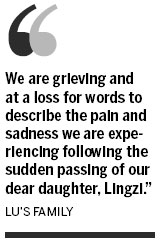 "We are humbled by the compassion, caring and love we have received from people all over the world," Lu's family told BU. "We wish to extend our thoughts, prayers and sympathy to the other victims of this tragedy and to their families."

Lu's family also expressed gratitude for the assistance they have received from the Chinese government, the US State Department, the Boston Police Department and Boston University.

Members of BU's extended community asked through Facebook, Twitter and several US consulates in China what they could do to honor BU students who were injured by the blasts and to memorialize Monday's tragic events, according to Feld.

"A scholarship fund in her name will be there forever," Feld said in a story in BU Today. "People can contribute to something that is ongoing."

The scholarship recognizes that every one leaves his or her own legacy, and it also honors BU's connection to China, which increasingly sends its students to study at the school and which welcomed 2,065 of these students this year, Feld said

An impromptu memorial of flowers and other gifts for Lu took form at the base of BU's Free at Last sculpture on the campus.