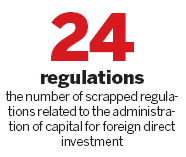 China scrapped a total of 24 regulations related to the administration of capital for foreign direct investment, part of the government's efforts to reduce red tape, increase transparency and promote investment facilitation.

The new rules focus on simplifying procedures and regulations for foreign currency registration, the opening and use of accounts, as well as receipt and disbursement of capital and settlements, SAFE said in a statement posted on its website on Saturday.

"China has basically established a registration-oriented policy framework for capital administration of FDI and outbound investment, and the monitoring of capital flows for direct investment has also been consolidated," the statement said.

The abolishment of the 24 regulations, including rules on renminbi reinvestment by foreign companies, makes the rules for administration of FDI funds "simpler, standardized and systematic", according to the SAFE statement.

"The abolished regulations were not in line with China's economic development and were the target of complaints from overseas investors," said Lu Jinyong, director of the China Research Center for FDI at the University of International Business and Economics. "The changes will improve the FDI environment and facilitate the business operations of foreign companies."

The move comes after the regulator's decision in December to remove a ceiling on investments by overseas sovereign wealth funds and central banks in capital markets to promote long-term foreign ownership and shore up the country's slumping equity markets.

In 2012, total FDI into the country declined 3.7 percent from a year earlier to $111.72 billion. The National Development and Reform Commission - the country's top economic planning body - outlined a 1.2-percent growth of FDI to $113 billion in 2013.

"SAFE is just in charge of a small part of China's FDI regulations, and it's necessary to thoroughly go over all the regulations. More efforts should be made to reform market access and industrial policies to facilitate business operations, taxation and the marketing efforts of overseas companies in China," said Ma Yu, a senior researcher at the Chinese Academy of International Trade and Economic Cooperation, a think tank for the ministry.

"The Chinese market has huge potential for FDI, but the key is to lift market obstacles and policy restraints, which is also a necessary step for China to rebalance its economic growth model and sustain economic growth," he added.