Women from China are giving birth in California and getting US citizenship for their newborns, while authorities are cracking down on homes where they stay, June Chang reports from Los Angeles.

Li lives in a boarding house in the affluent California city of Arcadia, about 13 miles northeast of downtown Los Angeles. She isn't alone. The other 29 units in her housing complex are either occupied or booked, all by Chinese women who are pregnant.

Like Li,who declined to disclose her real name, they are in the US to get instant US citizenship under the 14th Amendment to the US Constitution for their newborns and to get around China's restrictive one-child policy, which doesn't bar having another child abroad.

Though there are no official statistics on how many women come to the US to give birth, so-called maternity or birth tourism is legal as long as the woman has a valid tourist or business visa.

Birth tourism has been taking place for years in many major US cities, and because of its proximity to Asia, it has become especially widespread in Southern California with the Los Angeles area as the epicenter. Last week, Los Angeles County inspectors cited 16 boarding-house owners for illegally operating them in residential zones and said they'll ultimately be shut down.

A two to three-month stay at one of the houses in the Los Angeles area can range from $12,000 to $50,000, which includes lodging, meals, transportation, prenatal and nursery care and assistance in documentation preparation after the child is born.

A deluxe package - with around-the-clock, one-on-one nursery services for the newborn, a personal beauty and fitness consultant, and seasonal dishes prepared by star chefs - can cost as much as $80,000.

"The word-of-mouth of my old clients brings me new customers, mainly from Beijing and Shanghai," said a Chinese woman who runs the boarding house where Li is staying until she gives birth in June, and who declined to give her name. "You know, people there are rich these days."

She said that this year only 30 percent of her clients are here for their first child. "The rest are for the second or even the third," she said, adding all her clients come from the Chinese mainland.

The increase in maternity tourism by Chinese stems in part from the US government relaxing visa rules for the Chinese in June 2008, as well as Chinese being wealthy enough to pay the cost. By issuing more tourist visas, the US was hopeful that deep-pocketed Chinese tourists could help revitalize the then sluggish economy.

"All of a sudden, some shrewd Chinese expectant parents figured out that they can benefit from this [US] policy change," said Zhang Yong, an immigration attorney at a San Francisco-based law firm. "By manipulating contraception and pregnancy, and arranging travel plans accordingly, they can have their child born in the US and take advantage of the automatic citizenship."

When Amy decided five years ago to travel to California from China on a tourist visa in her third trimester and give birth to her son Dylon, she believed the boy would later be grateful for her thoughtfulness.

"He will sooner or later recognize the value and weight of his US birth certificate," said the 39-year-old manager for one of the nation's key players in the telecommunication industry.

Amy, who also declined to disclose her real name, said she paid approximately $30,000 for her child-bearing trip to the US, which she called the "best investment" she has ever made.

Amy remembers vividly being admitted to the labor and delivery unit at the Ronald Reagan UCLA Medical Center, on Dec 20, 2008. With Christmas a few days away, she said festive carols and decorations everywhere helped minimize her homesickness and loneliness and soothe the pain around her pelvic area.

Prior to the hospital, she lived in a single-family house that had been converted to a boarding home, sharing the two-story, 3,000-square-foot building with eight other pregnant women and three staff members for two months. 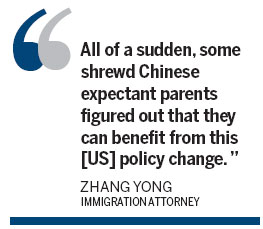 "I was all on my own," Amy said. "My husband wouldn't join me until my postpartum. Late pregnancy symptoms and the intense environment around (in the boarding home) were nothing but taxing. It all became worthy when I heard Dylon's first cry. I told myself from now on I am the mom of an American citizen."

Amy referred to provisions of the 14th Amendment, which ensures that "all persons born in the United States" are automatically granted citizenship and "full and equal benefit of all laws."

Foreign mothers giving birth on US soil also generate a population of "anchor babies". As US citizens, when the children become 21 they are eligible to sponsor their parents and relatives for legal immigration, functioning as the US "anchor" for their extended immigrant family.

US citizenship offers a wide range of government benefits and assistance programs, including Social Security; Medicare; free public education and possible merit-based loans and grants for college and hassle-free tourism access to 186 countries.

In contrast, there is strong competition for a job and career development in the world's most populous nation. Although China is second to the US in terms of economic strength, recent college graduates make a monthly salary of $450, according to a 2012 report by the China Data Center at Tsinghua University.

"I want my son to live an easy and happy life," said Amy, adding she doubts that would be possible in China. "I hope the US citizenship can provide him another option."

It takes about eight to 10 years on average for a legal immigrant to obtain US citizenship. "If something unpredictable happens, such as the gloomy economy or missing documentation, the waiting period could be longer," said Lu Ren, a New York-based immigration attorney, who said 70 percent of his clients are of Chinese origin. "So, the US-born children are really on a fast track regarding the acquisition of their citizenships," he added.

In an online survey conducted in April by Tencent, China's largest Internet service provider, 69 percent of 101,529 respondents answered "Yes" to the question of "Will you choose to give birth in the US if opportunity allows?"

Li and her husband, both senior engineers with the a power company in Xi'an, Shaanxi province, said they have long dreamed of having another child to keep their 7-year-old daughter company. They intentionally dodge discussing having another child in public "just in case the rumors will backfire and be heard by our boss," said Li, 37.

Violation of the policy, no matter in public service or private sectors, can lead to demotion, job termination of the person involved, and a monetary penalty that can be two to six times a family's annual income.

"The fiscal penalty (of having the second child) is not a problem, what we can't afford is losing our job, retirement pension and health insurance, the sense of security when we are getting older," said Li.

In the fall of 2012, she said her husband said, "`Why don't we try to have an American baby?'", noting that the one-child restriction doesn't apply to those who give birth outside of China.

Li said she managed to get pregnant and continued to work throughout her first and second trimesters, and asked for a sabbatical leave of six months to cover her coming to the US, giving birth and completing the newborn's citizenship documentation and then returning to China and her company.

Li said she can't wait to start her motherhood again in June. "My daughter and husband will fly into LA to welcome our new family member, a boy we will name 'Arcadia,"' she said.

In Arcadia, six to eight boarding houses have been closed in the past several months, and an additional 12 are under investigation. Last year the city created a task force of police, fire and business-licensing departments to investigate boarding houses, according to Jason Kruckeberg, the city's development-services director.

"In Arcadia, boarding houses that are not state licensed are not permitted in a residential zone," he said. "We do not have a land use designation for these uses in commercial zones either."

Maternity houses have grown beyond the scope of just a zoning issue, said Los Angeles County Supervisor Don Knabe. He said conditions inside some boarding houses put the safety of the mothers and babies at risk. For example, she said, owners usually remove adjoining structural walls to create more divided rooms, making it unsafe for occupancy based on the standard for dwelling units. "We must do what we can to protect them and stop this illegal activity," said Knabe.

Zoning and building-code violations led authorities in the Los Angeles County city of San Gabriel to close three townhouses that had been converted to maternity-boarding centers early this year.

Mayor David Gutierrez said that while he understood why some foreigners would choose to have their children born in the US, the future welfare of the children of foreigners shouldn't affect "services and quality of life that we provided for US residents."

Maternity tourism in Southern California made headlines in October 2011 with reports by US media, including the Los Angeles Times, CBS News, CNN and NBC News about residents in a quiet neighborhood of Chino Hills, a suburb of Los Angles, demonstrating outside a maternity hotel with posters that read "No Chino Hills, no anywhere". Authorities closed it in December 2012.

Birth tourism also has reached the US Congress. Some lawmakers have attempted to introduce bills to penalize maternity-hotel owners, as well as ask for a reinterpretation of the US Constitution.

Steve King, an Iowa Republican in the House of Representatives, sponsored a bill that would limit automatic citizenship to people with at least one parent being a US citizen, a legal permanent resident or serving in the military.

US Representative Judy Chu, a California Democrat, said she isn't convinced that birth tourism is a big-enough issue to warrant a reinterpretation of the Constitution.

"The 14th Amendment is fundamental to the US and too important to change because of the practice of a few," said Chu, the first Chinese American woman elected to Congress. "It would be a severe disservice to our nation if millions of immigrants are painted with the same brush."

In TV footage broadcast by CBS News in January 2012, a Chino Hills resident, Rossana Mitchell, said, "When people think of the American dream, they are not thinking about birth tourism. They are thinking about people who come here, immigrate here, work hard, pay their taxes, become citizens and become Americans."

In response to Mitchell's comment, a man named Ottom wrote on the CBS News website comment section: "Their babies most likely grow up with their parents in China, not using American resources. America has millions of illegal immigrants who are gaining undeserved sympathy; they are the big problem compared with the minimal scale of the so-called birth tourism The notion that these parents are abusing the 14th Amendment is absurd. It will take at least 21 years for these Chinese parents to obtain US green cards."

"During each of our US stays, we spent heavily in buying luxury suitcases, outfits and accessories on top of lodging and dining out," said Amy, adding that her son is contributing to the US economic recovery at a very young age.

Echoing Ottom's points, another person named Nova left his comment on the CBS website: "Having some child who is likely to come back at 18 to attend college and stay for a job, contributes to the US economy and pays income and social taxes, what's the problem here?"