Alibaba Group Holding Ltd said on Monday that money raised through a potential share-listing will fund acquisitions that will help the country's biggest e-commerce company broaden its services.

Jonathan Lu, who took over the helm as chief executive officer from legendary founder Jack Ma two months ago, said in Hong Kong he has "a lot of stuff he wants to buy" and the timing of the company's initial public offering will depend on whether he has a good acquisition target.

At the moment, Alibaba has no schedule for the IPO and the button is in Jack Ma's hand on how, when and if the company goes public, Lu added. He hinted the location will either be Hong Kong or the United States.

"My job is to make sure we are ready for an IPO and right now we are," Lu said.

Most of Alibaba's financial businesses will not be put in the IPO, including Alipay, the PayPal-like online payment platform, and its micro-loan services, said Lu.

Fillings from shareholder Yahoo showed that Alibaba had profit of $642.17 million in the fourth quarter of 2012. Wei expected full-year profits for 2013 would likely be in the billions of dollars.

Financial details for Alibaba are unclear but Lu said the company has plenty of cash at the moment, more than sufficient to support its operations and organic expansion. 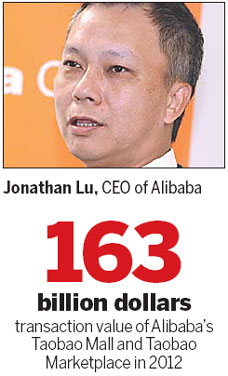 Hong Bo, founder of IT consultancy company IT5, feels that going public is not an "option" but a "must" for Alibaba even though it's not short of cash. That is because going public maximizes returns for the company's shareholders, including Softbank and Yahoo.

Hong sees Hong Kong as the location where investors are more familiar with Alibaba. He said he believes the IPO may happen sooner than expected.

"Under the current economic turbulence, the capital market is desperately longing for premium investment targets such as Alibaba so I presume the listing will happen pretty much in the way it desires," Hong said.

The only concern, he added, is that many investors who suffered losses when Alibaba privatized Alibaba.com in Hong Kong in 2012 might have some doubts about the new IPO.

Following the privatization, Alibaba bought back half of Yahoo's 40 percent stake for about $4.3 billion after taxes and fees.

Lu said he has not heard anything about whether Yahoo wants to remain as a major investor after the IPO, meaning that Yahoo could seek an exit if the valuation is favorable.

Alibaba's planned acquisitions are partly aimed at helping it tap deeper into the mobile device market. "It's not about if we want to go into the mobile market. It's about whether our customers are going in that direction," said Lu.

At the moment, Alibaba lags behind other Chinese Internet giants, including Tencent Holdings Ltd and Sina Corp, in the mobile market. But Alibaba's mobile strength lies in its massive amount of customer data, accumulated through its e-commerce platforms such as Taobao and Tmall.

In April, Alibaba paid $586 million for an 18 percent stake in Sina Corp's Twitter-like micro-blogging service Weibo, gaining access to the company's huge base of mobile users on its e-commerce platforms. In May, it agreed to pay $294 million for a 28 percent stake in Chinese mapping software firm AutoNavi Holding Ltd in another move to strengthen its mobile-based business.

Chinese companies could face US delisting

High-level China-US talks to kick off