Survey: China will replace US as No 1 superpower

China will ultimately replace the United States as the world's dominant superpower, according to a Pew Center survey.

The results, based on a survey of 37,635 people in 39 countries from March 2 to May 1 this year, reflect largely the views of Pew's survey two years ago.

In 23 of the 39 nations, majorities or pluralities say China either already has replaced or eventually will replace the US as the top superpower.

The report says this view is more prevalent now than it was in 2008 when the same question was asked. Today, majorities or pluralities in only six countries believe China will never supplant the US.

Data released by the National Bureau of Statistics show that of the 70 major cities the bureau tracks, 63 cities' new home prices increased in June month-on-month, five other cities saw declines and the remaining two were flat.

Property price growth rates will slow to within 5 percent in the second half, from more than 10 percent in the first six months, according to a report from the China Index Academy, a real estate research institute. (Photo 1)

China is learning how to feed the world's most populous country, but still needs stronger regulations to govern research and development, crop registration, seed-quality standards and selling practices, according to an executive of the largest US producer of hybrid seeds for agriculture.

"Building those kinds of regulatory structures cooperatively with the government, which we've been doing, is an exercise that ultimately builds trust and mutual respect," said Daniel Jacobi, vice-president for DuPont Pioneer's Asia Pacific region.

DuPont, the Delaware-based chemical maker formally known as EI du Pont de Nemours and Co, and China both "want regulatory structures that are science-based, that are transparent, that are evenly and consistently applied", he said in an interview with China Daily. (Photo 2)

The 16-year-old Chinese girl who was killed at the scene of Asiana flight 214's crash-landing in San Francisco was still alive after surviving the initial crash before being run over by a fire truck and killed.

San Mateo County Coroner Robert Foucrault said that Ye Mengyuan died on July 6 of multiple blunt injuries consistent with being run over by a motor vehicle.

"I am profoundly saddened by the involvement of a responding emergency vehicle in the death of 16-year-old Ye Mengyuan," Mayor Edwin Lee said in a statement.

The accident happened on noon of July 6 when Asiana flight 214 crash-landed on approach to San Francisco International Airport with 307 people aboard.

A total of 141 Chinese passengers on the flight have been accounted for, including three dead teenage girls who had come to the US for summer camp.

New visa rules will allow relatives of foreign residents in China more opportunities to visit their loved ones.

An S visa will be created for family members of professionals from overseas under regulations from the Legislative Affairs Office of the State Council.

Spouses, young children, parents and parents-in-law of professionals in China from overseas will all qualify for the S1 visa when the regulations take effect in September, authorities said. S1 visas will allow a stay of more than six months, while S2 visas will be for shorter visits.

Under existing rules, foreigners arriving in China for family reunions can only apply for an L visa.

Wang Huiyao, director-general of the Center for China and Globalization, an independent, non-profit think tank in Beijing, said he believes the new move will help attract and retain international expertise.

The number of foreigners entering and leaving China has increased at an average rate of 10 percent annually since 2000, reaching 54.3 million last year, according to the Ministry of Public Security. (Photo 4)

Express delivery market to surpass US

China is expected to become the world's largest market for express deliveries this year, passing the United States.

Xu Yong, chief consultant for the express and logistics website cecss.com, said his organization estimates 8.5 billion to 10 billion parcels will be delivered in China in 2013, compared with about 9 billion in the US.

"However, we see China's development in the express industry as too fast and unhealthy. The country's express companies sacrifice profit and service quality to pursue volume," Xu said.

According to a survey conducted in March by Legal Daily, eight out of 10 respondents said they were dissatisfied with the country's express service. Bad service and lost parcels were major problems in the industry, according to the survey. 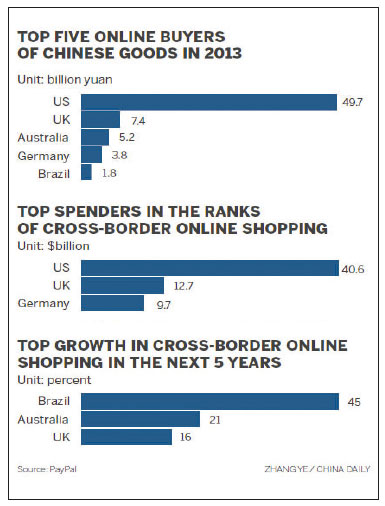 Confidence among Chinese consumers rose in the second quarter, according to a survey, and economists say that means their buying habits will support the world's second-largest economy in the face of slowing growth.

Zhang Monan, an economist at the State Information Center under the National Development and Reform Commission, said domestic demand, especially consumption, will become crucial to supporting economic growth in the second half of the year.

US is still No 1 destination for students

The US remains the top choice for Chinese students studying overseas , followed by the UK and Australia, according to the latest report from a China-based overseas study service.

According to the Education International Cooperation Group, 28 percent of Chinese students with overseas study plans picked the US, 18 percent chose the UK and 14 percent opted for Australia.

More than 56 percent of Chinese candidates in overseas PhD studies named the US as their top destination, followed by Australia, Canada and Germany, with just over 6 percent.

In November of 2012, an estimated 158,000 Chinese students were enrolled in US schools, about 22 percent of the overall international student population.

US is No 1 Internet buyer of Chinese goods

US Internet users will spend nearly 50 billion yuan ($8 billion) on purchasing goods made in China this year, making the country the top spender for Chinese goods, according to a report.

The United States is the biggest online buyer of Chinese goods with China set to sell more than $10 billion of products through the Internet in the top five global markets, a report by PayPal showed on Wednesday.

Other top buyers include the United Kingdom (expected to spend 7.4 billion yuan on Chinese products this year) and Australia, which it is anticipated will spend 5.2 billion yuan.

The proposed $4.7 billion takeover of Smithfield Foods Inc, the world's largest pork processor, by Shuanghui International Holdings Ltd will undergo an additional 45-day-long review by a US foreign-investment committee.

A Smithfield statement on Wednesday announcing the secondary review offered no comment on the reason for it.

But some experts say following a 30-day review, the Committee on Foreign Investment in the United States, or CFIUS, which vets proposed foreign acquisitions of US companies for national security concerns, is conducting the additional scrutiny due to "political pressure".

If it goes through, the deal - valued at about $7.1 billion including debt - would be the largest takeover of a US company by a Chinese buyer. 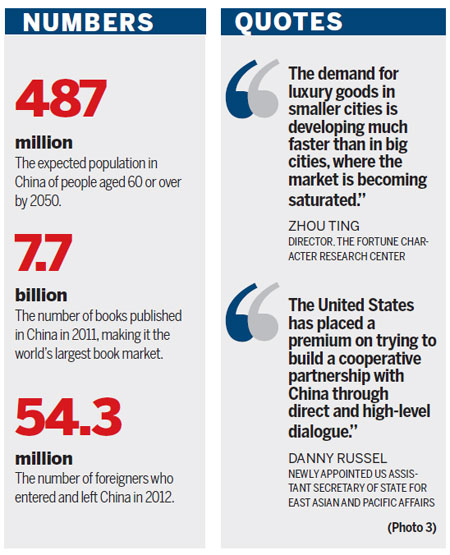