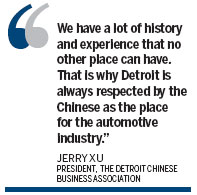 In the past decade, dozens of them have been drawn to the area, not just because of its existing infrastructure, supply network, abundance of skilled workers or tax benefits, but because of Detroit's pivotal role in automobile history.

"It is the center of modern vehicle technology," proclaims John Yang, chief metallurgist with ZYNP International, the US distribution arm of engine cylinder-maker ZYNP China Manufacturing. The facility is located in Romulus, Michigan, about 25 miles southwest of Detroit. "This area still has its strength in technology and talent," Yang said in an interview.

Overwhelmed by a debt of at least $18 billion, the Detroit filed for Chapter 9 bankruptcy protection last week, the largest such filing in US history. A legal muddle created by a county judge's ruling that the filing was unconstitutional was lifted on Wednesday when a federal bankruptcy judge cleared the way for the case to go forward without legal challenges.

As China's leadership boosts research and development for auto parts, mandated by the latest five-year plan (2011-15), Chinese automotive companies have stepped up their activity around Detroit, doing everything from R&D on behalf of parent companies back home to making parts exclusively for US auto makers.

Their arrival is welcomed by the state government, led by Republican Governor Rick Snyder, former chairman of California computer-maker Gateway Inc, and ex-chairman and CEO of Michigan venture-capital firm Ardesta LLC. The first-term Snyder administration sees China's interest in learning more about automobile production as a chance to create jobs for a hard-hit region.

Michigan was in the grip of a deep, decade-long recession through 2010. The state, whose economy is disproportionately affected by the automotive industry, lost nearly 218,000 manufacturing jobs from 2000 to 2005. It suffered further near the end of the decade when auto sales at General Motors, Ford and Chrysler plunged because the Detroit Three couldn't compete against fuel-efficient Japanese cars at a time of high gas prices. The US industry's woes were symbolized by the Chapter 11 bankruptcy filings of GM and Chrysler in 2009, moves now seen as necessary steps in the auto industry's resent resurgence.

Last year, the Great Lakes State, struggling to recover from the economic slump, exported $3.2 billion worth of goods and services to China, a 25 percent jump from 2011 and lagging behind only Canada and Mexico. Michigan received more than $917 million in capital from China in 2012 to become one of its top 10 direct-investment states.

"More and better jobs are created both by promoting Michigan exports to China and by attracting Chinese companies to locate operations in Michigan," says Michael Finney, president and CEO of the Michigan Economic Development Corp, a public-private partnership that provides grants, loans and other economic assistance to businesses that make investments or create jobs in the state.

Finney calls China's economic growth "an opportunity" for Michigan. Chinese officials feel the same way. During a recent visit to the Detroit Chinese Business Association in Troy, about 25 miles north of the city, Zhao Weiping, China's Chicago-based consul general to the Midwest, called Michigan "an important business partner of China".

The Chinese auto industry's increasing presence in the Detroit suburbs continues a pattern of auto-production decentralization that started in the 1920s and shifted into high gear in the 1940s and 1950s, when GM, Ford and Chrysler expanded into new facilities around Detroit. That move helped push auto production into a truly national industry, responsible, at the city's height at mid-century, for one of every six US jobs.

"Here in Detroit, we have a tradition," says Jerry Xu, president of the Detroit Chinese Business Association, a nonprofit business network that fosters bilateral business relationships between US and Chinese companies. "We have a lot of history and experience that no other place can have. That is why Detroit is always respected by the Chinese as the place for the automotive industry."

The business association estimates that about 100 Chinese firms, mostly in the auto industry, are active in the region. Those who come here typically aim to make a name for themselves in the global marketplace via Detroit, which has retained its legacy as a model for American innovation, notwithstanding its long decline and financial problems, Xu said.

Understanding that the path to success is through the Motor City, "they have to find a way to push through and come to the US, to the Michigan area, to realize that aspiration," Xu said.

Sometimes, he said, large companies come with abundant talent and experience in doing business in the US. But "there are a lot of medium and small businesses from China that need help when they come here", Xu said.

The area's abundant engineering talent is a magnet for Chinese auto-related companies looking to increase their knowledge of automobile production.

Hong Su, vice-president in charge of research at the United States R&D center for Chinese automaker Changan, in Plymouth, Michigan, about 25 miles west of Detroit, said he has hired about 20 engineers with US auto industry experience in the last few years because of their expertise in developing vehicles.

"In China, at original equipment manufacturers, the senior people - even managers and directors in engineering - have less than 10 years, 15 years' experience," Su said. "And most of that experience is in reverse-engineering, or copying. They don't have vehicle-development experience." Su chuckled as he said the youngest engineer at the US R&D center, which focuses on chassis design, has 19 years of Detroit industry experience, which is more than some senior managers in China. By contrast, his most senior employee, now retired, had 35 years' experience.

China has reverse-engineered many cars, but even creating a copy requires vehicle-development know-how, Su said. "Vehicles have copyright issues; sometimes you are forced to modify. If you don't know the principles of how to modify, you can't do it."

Most important, you need vehicle-development expertise to make automobiles to the performance and quality specifications demanded by today's buyers, he said.

"You can never copy the technical know-how," he said, as he showed a prototype of a large sedan that Changan, traditionally a maker of smaller cars, plans to build and sell in China. When finished, the car will target prosperous buyers with families who also crave a big, luxurious vehicle.

Frank Yang, managing director at ZYNP International in Romulus, said the combination of the Detroit area's existing transportation and manufacturing infrastructure, talent pool and cost-efficiency, along with government tax breaks, allow that US unit to pursue its plan to be a one-stop, full-service company in the engine cylinder industry. ZYNP International's ability to offer customers R&D, engineering, supply chain management, manufacturing and financing under one roof "differentiates us from our competitors, either locally or internationally", Yang said.

"All this is hard to find in other areas of the country," he said. "Detroit is the hub."

Showing that being Chinese doesn't guarantee a job here, ZYND's Romulus-based engineering staff hail from a range of countries, including China, the US, Brazil, Mexico and Canada. The company employs 50 to 80 people, including seasonal workers. Most are Americans or US residents. The staff includes one or two Chinese nationals and very few Chinese Americans because the company emphasizes US industry experience.

"We only have visitors from our China operation to do troubleshooting, to take training, to give training, and to receive whatever knowledge they can take from the US," Yang explained.

He said the company used its flexible pay system and entrepreneurship programs to lure valuable laid-off engineers "to grow together with us".

At ZYNP, workers repackage engine cylinder liners in returnable containers, or "dunnage", made in China for direct shipment to customers that include GM, Ford, Chrysler, Volvo, Nemak, Navistar and Cummins.

ZYNP's history dates back more than 50 years in Mengzhou, China, where it has its manufacturing operations. The company, which employs 3,500 people in China and North America, started ZYNP North America in two Romulus locations in 2005.

Program development manager Leslie Santos said Detroit's bankruptcy "does not impact ZYNP's business or plans. Although ZYNP is in the metropolitan Detroit area, that does not mean we are located in the city. We are not connected to Detroit as far as our administration or anything like that. We just say we're in Detroit because Detroit is so well known as the automotive capital of the world," she said.

Despite Motown's well-publicized woes, the Chinese automotive companies' arrival has triggered an influx of companies from other fields. The new arrivals are "looking for clean technologies, environmental and water solutions" as directed by China's latest five-year plan, according to Milan Stevanovich, business community development officer with the Detroit Chinese Business Association.

"We've had such an overabundance of automotive engineers here over the last five years, a lot of these engineers here are now either working with angel capitalists or are just starting new startups in all these new emerging sectors," Stevanovich said. "It's quite an exciting time to be here in Michigan."

Some observers see China eventually joining Japan, Germany, South Korea and other foreign countries in making and selling vehicles in the US. A March report by the US Congressional Research Service said the Chinese government ultimately is "seeking to develop vehicles that will be built in China and exported more widely to other markets, as the Japanese and Koreans did earlier."

China already is a major importer of US auto parts. Last year it imported about $1.6 billion worth of parts, according to United States International Trade Commission statistics. The Congressional Research Service report says recent acquisitions of US parts companies will help Chinese parts makers "target technology and product innovations to enhance their operations" back home while "also permitting a shift from supplying low-margin parts to more profitable activities, such as integrating parts into component systems".

China's recent acquisitions include Chinese auto-parts conglomerate Wanxiang Group's $250 million acquisition early this year of US battery maker A123 Systems Inc; the purchase by Pacific Century Motors, a joint venture between the Beijing municipal government and another Chinese partner, of Nexteer Automotive from GM in 2010 for $450 million, the largest Chinese acquisition of a US auto parts company; and the purchase by Beijing West Industries, a joint venture of two Chinese State-owned enterprises, of the suspension and brake units of Delphi Corp in 2009 for $100 million.

Making and selling vehicles in the US would cap off the Chinese automotive industry's 30-year-long effort to develop globally, which reached a milestone in 2009 when it overtook the US to become the world's largest producer of and market for motor vehicles.

Xu, of the Detroit Chinese Business Association, says the day of China making and selling cars in the US could happen.

"China is not the first group to come here to do business," Xu said. "There's Korean, Japanese, there's German.

"As long as you have good quality, and service, the American market is open for you."

Changan's Su says the US may have to wait five to 10 years to see the first Chinese car sold here, given the engineering techniques typically demanded by developed nations, including pollution-control and safety features. He cites the slow rise of Japan's Toyota Motor Corp as an example of how emerging nations can eventually break though in the fiercely competitive global marketplace.

"Twenty-five years ago, the Japanese came here and tried to study the US market," Su said. Now Toyota can match strides with GM and Ford in the world market. But even Toyota is a relative newcomer to the US marketplace compared with one particular Detroit icon that still continues to have its world headquarters in the Motor City.

Scholars provide a tour 'around the world'