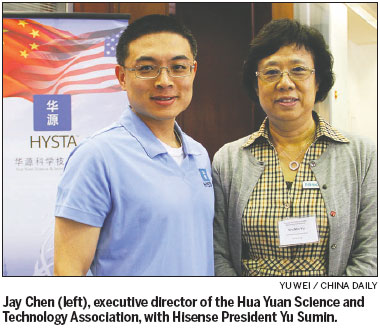 Ten years ago, it would have been out of the question for Hong Kong-born Kenneth Lam to give up his job as a Silicon Valley engineer and move to the Chinese mainland. But things have changed. Now that China has become the world's second largest economy, the skilled engineer is eager to make a splash in China's emerging tech sector.

"I see China as a very high potential growth market for all products and I believe China will surpass the US as the world's biggest economy in the future," Lam said at a Hisense Silicon Valley talent recruiting event hosted by the Hua Yuan Science and Technology Association on Saturday. "So I want to go back and create better technology for China and help bring them up to the next level."

Hisense Co Ltd, based in Qingdao, Shandong province, is a world leader in flat-panel TVs, household appliances, and mobile communication devices. Hisense is a household name in China and has been the country's market leader in flat-screen TVs for the last nine years.

This is the third recruitment roadshow that Hisense has conducted in North America. Before its final stop in Silicon Valley, it made stops at Waterloo, Ottawa and Montreal in Canada as well as Boston.

Lin Lan, a vice-president of Hisense, said, "Over the past three years, we have got probably seven or eight very high quality engineers from our North America talent recruiting efforts and three of them were from Silicon Valley. In a very short time period, they have already assumed big responsibilities in the company."

In this year's talent hunt, Hisense is offering more than 100 high-end positions in communications, IT, multimedia, smart information systems and others. In addition to engineering jobs, Lin said the company is also on the lookout for managers to lead all that talent.

With about 75,000 employees worldwide, Hisense has 17 production facilities and 7 R&D centers around the world. Its products are sold in more than 130 countries.

In 2012, Hisense's global revenues increased 20 percent year-on-year, with the US, Europe and Australia contributing to most of that growth. Lin said Hisense is trying hard to transition itself from a purely Chinese into a global company and having overseas talent helps that happen.

Hisense USA, the subsidiary Hisense established in 2001, didn't really start business until 2007. Based in Atlanta, it today sells into retailers across North America such as hhgregg, Best Buy, Walmart, Costco.com and many others.

"Roughly, Hisense USA had only about $30 million sales in 2007, but it did almost more than $500 million last year," Lin said, adding that the company has also expanded very quickly with its sales marketing and customer support. Hisense USA now employs more than 100 people, with more than 65 percent local hires.

Hisense's most popular products in the US are its television sets, which have around a 2 percent market share, "still low, but momentum is building," Lin said.

One bright spot is that Hisense is becoming better known in the US compared with other brands, and it is happening quickly, with lots of good feedback, he added.

"Our goal is to be No 3 or at least No 4 in three years in the global TV market, which is at present about 7 percent. In China, we are around 4 and half percent and we want to double that," said Lin.

And that goal could be achieved with the help of people like Kenneth Lam, who, after sitting through the presentations at the talent hunt in Silicon Valley wanted to get involved. "I believe their story," he said. "I'm convinced that Hisense can be one of the world-class technology firms in the very near future."