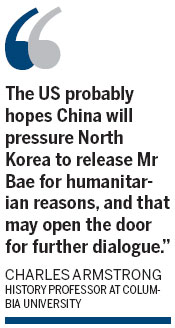 The US is asking China and other East Asian countries for help in securing the release of Korean American Kenneth Bae by the Democratic People's Republic of Korea and on improving the human rights situation in the DPRK in general.

US Special Envoy for North Korea Human Rights Issues Robert King is scheduled to travel to China, the Republic of Korea and Japan from Aug 19-29 for regular consultations with senior officials and civil society groups on a range of human rights and humanitarian issues, according to a State Department statement.

The State Department did not say whether the trip is linked to efforts towards the release of Bae, a 45-year-old tour operator and Christian missionary sentenced to 15 years of hard labor in May by the DPRK for "hostile acts to bring down its government".

But Charles Armstrong, an expert on the Korean Peninsula and a history professor at Columbia University, said the most immediate issue is the release of Bae, who was imprisoned since last November.

"The US probably hopes China will pressure North Korea to release Mr Bae for humanitarian reasons, and that may open the door for further dialogue," Armstrong said.

Bae was hospitalized recently for poor health. The US has been calling on the DPRK to grant him amnesty and release him immediately.

In a recent case, Eddie Jun, a Korean American from California, was released by the DPRK in May 2011 after King visited Pyongyang to assess the food situation there. Jun had been accused by the DPRK of committing crimes against the state, which had been described by others as alleged unauthorized missionary work.

On Wednesday, State Department spokeswoman Jen Psaki indicated that King is not travelling to DPRK and she was not aware of plans for any senior US officials to travel there either.

Armstrong pointed out that human rights issues have become a priority in US policy toward DPRK. "Ambassador King will ask for Chinese, Japanese and South Korea support in addressing North Korean human rights issues," he said, adding that this may indicate that the US is moving toward dialogue with the DPRK, as the North Koreans proposed earlier this year.

Scott Snyder, a senior fellow and director of the program on US-Korea policy at the Council on Foreign Relations, said King must be engaging in consultations on North Korea's humanitarian and human rights issues, adding that there are a wide range of issues that he could be discussing.

Tensions that escalated after the DPRK's nuclear test in February have subsided in the past months, after a flurry of diplomatic efforts by the US, China, the DPRK and several other countries.

In a talk on May 10 in Washington organized by the Institute for Corean-American Studies, King said the US government likes to engage the DPRK government in a discussion of human rights issues.

He cited the human rights dialogue between the US and China. "While we still have problems with where China is today, remarkable progress has been made," he said.

"If we can get North Korea to move as fast as China has moved, we will be cheering."

He admitted that part of the problem has been the strained relations between the US and the DPRK in past years.

Armstrong believes that the plight of North Korea "refugees" in China will also be an issue brought up during King's visit. King indicated that the US would like China to send the DPRK "defectors" to the ROK instead of back to the DPRK.

China has called for the issue not to be politicized and objects to the description of the people as "refugees". Instead Chinese officials describe them as people illegally entering China for economic reasons.

King admitted that given the US' own border problems, it's hard for the US to be too critical of China on this issue.

But he pointed out that as more North Koreans travel back and forth across the Chinese border legally, they are set to be impressed by the fast changes happening there.

"There is an increasing number of North Koreans who travel to China and you can't go to China, particularly to Northeast China, and see the vibrant Chinese economy, the relative freedom compared to what you see in North Korea, and not have an impact on the people who see it," he said.

China will overtake US as world's No 1 consumer

Manning 'sorry' for US secrets breach