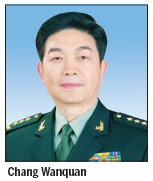 Chinese Minister of Defense Chang Wanquan will meet with US Secretary of Defense Chuck Hagel at the Pentagon on Monday in a bid to strengthen bilateral military ties, a pledge made by top leaders of the two nations in early June.

Pentagon spokesman Steve Warren told reporters on Friday that the two defense chiefs will have an opportunity to discuss a wide variety of issues, including the US-China relationship and their military-to-military relationship.

The two are also expected to hold a joint news conference after their talk.

Chang's four-day visit, which began on Friday, comes after top leaders and senior officials of the two countries pledged to strengthen military cooperation and exchanges during the informal summit between Chinese President Xi Jinping and US President Barack Obama in Sunnylands, California, in early June and the fifth round of the China-US Strategic and Economic Dialogue (S&ED) held in Washington last month.

The Chinese side has already extended an invitation to Hagel to visit China, but Warren indicated no date had been decided. The outcome document of the last S&ED said Hagel would travel to China in 2014.

Ma Gang, a professor at the People's Liberation Army National Defense University, said a new type of military relationship between China and the US is an important part of building a "new type of big-country relationship", which was discussed by Presidents Xi and Obama.

"Minister Chang's visit to the US and his US counterpart visiting China in the future are meaningful and a good way to form new military ties, improve mutual understanding and ease confrontation between the two armies," Ma said.

Chang's interest in USNORTHCOM may have to do with the unique role it plays in issues like disaster relief and the civil-military partnership as part of the discussions the US had with the People's Liberation Army in recent years, according to Warren.

He said that Chang's visit to the Pentagon "illustrates and will help to sustain the positive momentum that has been achieved in the US-China military-to-military relationship over the past 18 months".

That positive momentum began when Xi visited the US in February last year as China's vice-president, according to Warren. During the visit, Xi visited the Pentagon at the invitation of then Defense Secretary Leon Panetta.

"That set in motion a series of positive and sustained engagements between the two militaries that continues today," Warren said.

China and the US have decided to actively explore a notification mechanism for major military activities and to continue discussion on the rules of behavior on military air and maritime activities, according to the outcome document of the fifth round of S&ED

Douglas Paal, vice-president for studies at the Carnegie Endowment for International Peace, a think tank in Washington, said both military leaders should express what their political leaders intended at Sunnylands. That is to find a way to avoid falling into grinding and expensive competition.

"To do that they need to open their strategic thinking to each other and search for common ground and ways to shrink suspicions," said Paal.

Bilateral military ties, which have long lagged behind relations in other dimensions, have warmed up in the past year.

Martin Dempsey, chairman of the US Joint Chiefs of Staff, visited China in April amid tensions on the Korea Peninsula.

Next month, Admiral Wu Shengli, commander of the Chinese Navy, is also scheduled to visit the US, according to Jonathan Greenert, chief of US Naval Operations, at a meeting last month.

Shen Dingli, vice-dean of the Institute of International Affairs at Fudan University, said China and the US have conducted joint search and rescue missions off Hong Kong and they need to conduct joint naval drills with combatant mode.

"It is not impossible to arrange this," he said. "To conduct joint military drills doesn't mean the two militaries would not fight against each other. But not to do it would only increase the chances of doing so."

Trustee council may be answer for reforming