Chinese Minister of Defense Chang Wanquan was blunt in voicing dissatisfaction over the US rebalancing to Asia policy, which he believes needs to be rebalanced itself.

While reiterating Chinese President Xi Jinping's words to US President Barack Obama in their summit in early June in California that the Asia Pacific is big enough to accommodate the needs of the two big nations and China welcomes a constructive US role in the region, Chang pointed out that countries in the region have noticed that the US military presence has stood out in its Asia rebalancing strategy.

"This includes the US military deployment in the region and the military drills and cooperation with US allies," Chang told a joint press conference with US Secretary of Defense Chuck Hagel at the Pentagon on Monday afternoon.

"Lately, the US military exercises in the region have intensified in both frequency and scale. This to some extent has complicated the situation in the Asia-Pacific region," he said.

The US rebalancing strategy has drawn suspicion in China, some believing it is part of a US strategy to curtail China's rise. Many also believe the strategy has emboldened some US allies - in particular Japan and the Philippines - to challenge China by breaking the status quo on some maritime territorial issues.

Some US pundits, such as Kenneth Lieberthal, a senior fellow at the Brookings Institution and a China hand, also agreed that the rebalancing strategy needs to be rebalanced.

In an open letter to Obama early this year, Lieberthal pointed out that the strategy is generating dynamics that increasingly threaten to undermine its primary goals.

"It is therefore time to rebalance judiciously the rebalancing strategy," he said in the letter, adding that the US-China relationship has gone in the wrong direction and distrust has grown since the pivot to Asia started about two years ago.

Chang hoped the US rebalancing strategy does not aim at China or seek to weaken China.

Chang noted that there are still some hot spots and sensitive issues in the Asia Pacific despite the overall stability in the region.

"Some hot spots have become hotter and some sensitive issues have become more sensitive," he said. Though Chang did not elaborate, it is believed he was referring to tensions in the East China Sea and South China Sea, where maritime territorial disputes between China and Japan and China and the Philippines have escalated in recent years.

Chang warned that if not handled well, these issues could cause great trouble for the security in the Asia-Pacific region and the whole world.

Zha Daojiong, professor at the School of International Studies of Peking University, said the governments of Japan and the Philippines are taking full advantage of that talk of "trust deficit" between Beijing and Washington.

"Behaviors on the part of Tokyo and Manila can lead to miscalculation in either Washington or Beijing," he said.

Zha said the US must work to convince China that its pursuit of military ties with Tokyo, Manila, Singapore, Canberra and Hanoi does not amount to a new, Cold War style encirclement of China. 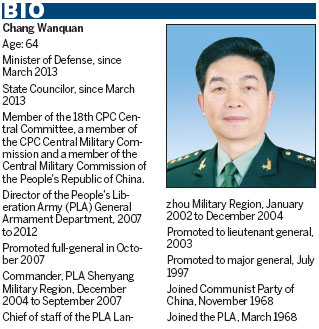 Typhoon wreaks havoc in the south