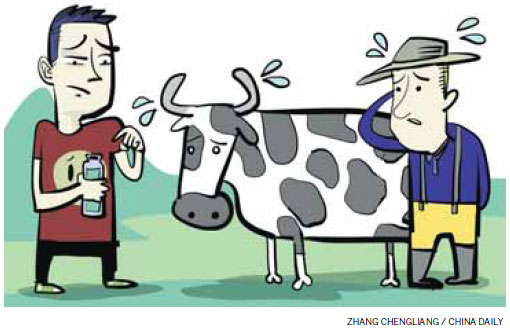 China's economic success has changed the world. No longer isolated, China has become integrated into the global economy and, therefore, into global affairs.

China's exports are enabling emerging nations to improve their standards of living. Its massive demand for quality imported products makes it a key market for many multinationals, while its appetite for commodities has become essential to the health of many national economies, including poor ones.

Earlier this month, we learned that New Zealand Prime Minister John Key will make a special trip to China to apologize in person for the recall of contaminated milk products sold by his country's largest dairy cooperative, Fonterra.

Although the contaminated batches of milk product were produced as long ago as May 2012, it was only at the end of July 2013 that Fonterra sent a recall to the eight customers in China, Australia, Russia and the United States who had received the contaminated product.

Within a few days, the story had spread. Fonterra's CEO visited China in early August to provide explanations and reassurance. A week later, Key decided he will come to China himself.

The prime minister's response contrasts with what happened earlier in May, when the former chairman of Fonterra, Sir Henry van der Heyden, told a business conference in New Zealand that "doing business in China is full of surprises". In response to a question, he added: "Bad experiences should be used as experiences to learn from. Don't trust them, ever."

New Zealand operates 60 percent of the world's trade in dairy products. Since the Sanlu milk scandal in China in 2008, when it was discovered that Chinese farmers were adding a poisonous industrial product to cows' milk to increase the perceived protein content, China's dependence on imported milk products, particularly infant formula, has increased dramatically.

New Zealand's reputation for product safety has made it into a key supplier to Chinese households. In 2008, New Zealand's exports to China totaled NZ$2.5 billion ($2 billion). In 2012, they were worth NZ$6.9 billion, almost a threefold increase in four years.

Although Russia joined China in placing an immediate ban on imports of the affected dairy product from New Zealand, Key has not announced that he will visit Russia to apologize there as well. It's not difficult to see why. Russia imported NZ$230 million worth of products from New Zealand in 2012. By contrast, so far in 2013, 18 percent of New Zealand's exports have gone to China, which, reinforced by a Sino-New Zealand free trade agreement signed in 2008, has just overtaken Australia as New Zealand's number one trade partner.

Given New Zealand's leading role in the global dairy trade, and with Chinese demand for dairy products projected by Fonterra to increase by 7 percent annually through to 2020, China is set to become New Zealand's dominant export market.

Exports make up one-third of New Zealand's GDP. China is starting to play a critical role in New Zealand's economic well-being. That's why Van der Heyden was forced to issue a public apology a few days after making his comments about doing business in China.

Van der Heyden said his remarks had been taken out of context and that he was "really positive" about China. The fact is, though, that New Zealand's increasing economic dependence on China has changed the country's attitude toward its huge North Asian trading partner.

It's not just New Zealand that is becoming heavily dependent on Chinese demand to expand its economy. Six percent of Australia's GDP now depends on exports, mainly of iron ore, to China. Commodity producers in poor or middle-income countries in Africa and Latin America - such as Peru, Brazil, the two Congos and South Africa - have benefited greatly from the surge in Chinese demand since 2000.

Statistics provided by the International Monetary Fund show that between 2000 and 2012, per capita GDP in purchasing power terms in emerging countries increased by 123 percent. In advanced economies over the same period, it increased by only 45 percent. China's arrival on the world scene has given much of the poor world a huge economic boost.

But the other side of the coin is that many countries with much smaller economies are becoming heavily dependent on continued growth in Chinese demand for increases in their standards of living.

Even as its economy slows, China will continue to depend for food and commodity imports on several key suppliers. Some of these, such as Brazil, are still emerging countries. Others are advanced economies, such as Switzerland, which has just finalized a free-trade agreement with China and makes it a vital conduit for China's trade with the European Union. In the first half of 2013, Swiss exports to China leapt by 135 percent year-on-year to $26.8 billion, placing Switzerland 10th behind South Africa, Malaysia and mighty Germany in a 2013 list of countries exporting to China.

Key's decision to visit China highlights the extent of the country's integration into the global trading system, which has made the situation today very different from 200 years ago..

The Fonterra case shows that China's continuing global integration, highly beneficial both for China and the rest of the world, requires a continuing alignment of ideas between East and West. This difficult but essential process will play a major role in the world's evolution over the next few decades.

The author is a visiting professor at Guanghua School of Management, Peking University. The views do not necessarily reflect those of China Daily.

Bo insists he did not abuse power