A growing Chinese willingness to go under the knife for cosmetic purposes cuts to core questions about the changing national psyche. Many are facing the ugly side of beauty's pursuit - addiction, disfigurement and self-esteem problems. Liu Zhihua reports.

The public hasn't seen the face of the woman who's perhaps China's most famous cosmetic surgery recipient. That's because Pink Baby wears a surgical mask when she appears on TV - not only to protect her identity but also because she claims to have been disfigured by more than 200 plastic surgeries since age 16. The 31-year-old Jiangsu province native has become the public (although unseen) face of an increase in botched cosmetic procedures and plastic surgery addiction in China, as modernity is reshaping the body of traditional beliefs opposing plastic surgery. More people are going under the knife for cosmetic purposes, as entertainment and celebrity obsession have carved a new national psyche, slicing through long-held conceptions against modifying one's body because it's a shrine to one's parents. 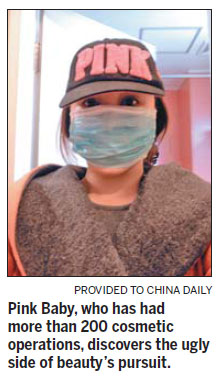 The country ranks first in Asia and third in the world, after the United States and Brazil, in the number of cosmetic procedures - more than 1 million in 2011, the US-based International Society of Aesthetic Plastic Surgery reports.

But the figures include only operations performed by certified professionals. Many Chinese undergo procedures at illegal cosmetology hospitals, clinics and beauty salons.

Some are discovering the ugly side of beauty's pursuit.

While many are concerned about failed procedures, few fathom the possibility of becoming addicted to plastic surgery.

"It's irresistible. I feel compelled to keep getting operations."

She has undergone virtually every procedure available, she claims. Her body has been altered from head to toe but in negative ways, she says.

She can't lift her eyebrows. Her eyes are so scarred they can't close.

'Insincere' Tokyo not ready for talks

Central city with a global vision