China's Hainan Airlines on Tuesday commenced nonstop service between Chicago O'Hare airport and Beijing, making it the only certified Skytrax five-star carrier in China and the first Chinese carrier to enter the Beijing-Chicago direct market. Dignitaries celebrated the inaugural flight with a ribbon-cutting ceremony in Terminal 5 at O'Hare, exchanging gifts with Chicago officials symbolizing friendship and cooperation.

Hainan plans to use a Boeing 787 Dreamliner on the route beginning later this year. "Then that will be the first transpacific route operated with a Boeing 787 from O'Hare," said Chicago Department of Aviation Commissioner Rosemarie S. Andolino. 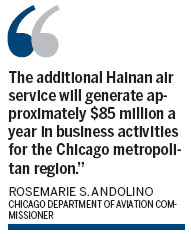 "Hainan Airlines has been operating the Dreamliner on Chinese domestic routes since July," said Wei Hou, vice-president of Hainan Airlines. "After extensive training and operating experience, we are planning to introduce the Dreamliner onHainan's North American routes initially betweenBeijing andChicago, and as the fleet grows, toSeattle,Toronto and other new destinations."

The frequency is also expected to increase from two to four flights weekly by the end of 2013, when the Dreamliner is introduced. The Dreamliner will offer three classes of service, business, premium economy and economy. Until the 787 is ready, Hainan will fly the route with an Airbus 340 offering economy and business class.

"New investment and interaction between Chicago and China is a high priority for the city's mayor Rahm Emanuel," said Andolino. "The new air service from Hainan is a critical step in that direction."

The new route has been introduced to meet a strong demand for business travel - as well as growing demand for leisure trips - between the cities and beyond. It also complements the carrier's existing service between the Chinese capitol and Toronto and Seattle.

"I am extremely happy to see Hainan Airlines begin a new route to Chicago," said Zhao Weiping, Chinese consul general to Chicago. "It will create more tours and business ties between our countries."

"Chicago is the third-largest metropolitan area in the US, so the market is very important to us," said Pubin Liang, general managerof Hainan Airlines North America.

Local debts not to drag China into financial crisis