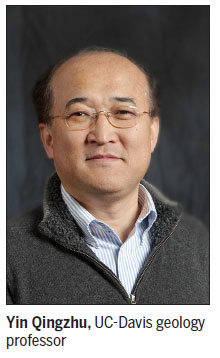 An international team of scientists has created a tool to precisely pinpoint where petroleum and gas reserves have accumulated beneath the earth. One of the team members is a Chinese geologist from the University of California-Davis.

"The major focus of my research in the past has been on fundamental science with little real world relevance," Yin Qingzhu, UC-Davis geology professor, told China Daily on Thursday. "But this particular topic was different."

The tool is a new index that provides a better understanding of how oil travels from where it was formed to where it has collected, he said.

The index, described in a study published in the journal Scientific Reports, could aid in the discovery of new oil resources and also help reduce the environmental impact of accessing those resources.

"It should result in fewer incidents of failed drilling, which should reduce unnecessary environmental disturbance," he said.

Yin is a graduate of Peking University with a bachelor's degree in geology. He got his master's degree from the Chinese Academy of Geological Sciences and his PhD from the Max-Planck-Institute and Johannes Gutenberg University in Mainz, Germany.

He worked at Harvard for eight years before going to UC-Davis as a professor in 2005.

With further research, Yin said, his index could also be used to trace pollutants caused by oil spills and guide environmental mitigation in such cases.

Generations and generations of people have been trying different tools, he said. The problem was these tools have not been good indicators of the distance oil travels and there are a lot of variables, depending on the oil source, he said.

"In this study, we teased out the facts," he said, "and created a model. Then we applied it to the real world and found it works really beautifully."

According to the study's authors, secondary petroleum migration in many basins around the world is poorly understood and yet information about this process is the most important data for petroleum exploration.

The scientists tested the index at the Xifeng Oilfield in Inner Mongolia, as well as the Western Canada Sedimentary Basin, which contains one of the world's largest reserves of petroleum and natural gas, according to a recent press release from UC-Davis.

"Wherever my research interests and curiosity take me," Yin said, "I find we have lots of talented Chinese scientists making progressive impacts in the world arena of science."