Learning China through its food


Charles Shoemaker, director of the Confucius Institute at UC-Davis and professor of food science and technology with extensive experience in China, said there were more and more large food companies located in China, particularly in Shanghai, like Pepsi, Coco Cola and KFC.

When they go to China, they need to change flavors and make sure their products match the market, he said.

He also said the "food safety" issue would be part of the research cooperation for both sides in the future.

Through the Institute's cooperation, China and US are both learning and exploring how to deal with the problem in a safe way through technology, he added.

Scholars from both universities believe this Confucius Institute draws upon the strengths from both sides, particularly in food science and technology, as well as beverage science.

Dong Jianqiao, professor and dean of the School of Foreign Studies at Jiangnan University since 2004, reported to his new duty as the deputy director of the Confucius Institute at UC-Davis in August. 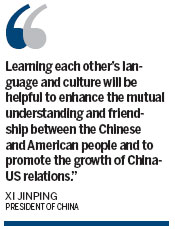 "We'll be providing supporting services for Chinese language and culture learning," said Dong, noting that Mandarin learning camps would be available to the surrounding community and high school students.

Three instructors from Jiangnan have already arrived at the UC-Davis campus and are working with their American counterparts to plan the offerings, according to Dong.

"At the beginning, we won't offer credits to students," he said. "All the courses will be non-degree."

Throughout the semester the institute will offer seminars on Chinese food and culture, workshops with hands-on Chinese food cooking opportunities, and Chinese festival demonstrations intertwined with festive food making.

"We are hopeful that a student will learn Chinese culture and language through the pleasant, pain-free experience of making and tasting Chinese food," Dong said. "Instead of scattered, compulsory learning of the Chinese language and culture like many Chinese programs offer, our program is designed as a fusion of dining, cooking and fun learning."

Trending news across China on Sept 18

EU ready for talks with China on investment pact

Space station to open for foreigners

Number of China's female billionaires on the rise