Building bridges in more ways than one

In a unique scholarship scheme, 20 students from the Republic of Congo are pursuing their dreams of a professional career by studying at Chang'an University in Xi'an, Shaanxi province.

The students are the first Congolese to study in China, and are in Xi'an, the capital of Shaanxi province, thanks to sponsorship from China Road & Bridge Corporation, one of the country's biggest offshore construction contractors.

Majoring in civil engineering, harbor, a costal and offshore engineering and project management, they are the first batch of 100 Congolese students to accept five-year undergraduate education at Chang'an University. All will be fully funded by CRBC as part of the corporation's commitment to its social responsibilities to improve people's lives in the Republic of Congo, which is one of the company's key overseas markets.

The 100 students will be sent in five batches over the next five years to study at the university, one of the key colleges with strong educational capabilities in transport construction, land and resources, and urban and rural development.

"The project's aim is to cultivate professional experts who will devote themselves to the economic development of the Republic of Congo," says Zhang Jianchu, chairman of the CRBC board.

Moudoudou Placide, the Republic of Congo's government representative for the project, says that the CRBC's support for the students will not only develop talented people but will also improve its profits, both of which will produce long-lasting benefits to all those involved. 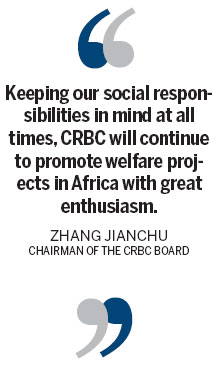 "Based on aid projects, CRBC follows the Chinese saying that we reward not just with fish, but also with fishing in how it cultivates local professionals in Congo," Li Shuli, China's ambassador to the Republic of Congo, says.

In accordance with the company's management policy of expanding markets and creating harmony to repay Congolese society, CRBC has contributed to promoting the welfare of the local people and has earned a good reputation in the country over the past decade.

From 2008 to 2012, CBRC as a contractor built the first phase of Congo No 2 state highway, which links the south of the country with the north.

Due to poor transport and unpredictable weather, local people faced many difficulties and CRBC workers were involved in rescuing people affected by natural disasters.

During the rainy season, the roads become very muddy and road accidents are common. CRBC is always quick to send rescue personnel and the necessary machinery and equipment to treat the injured and recover the vehicles.

In March, 2012, a forest fire broke out near a village on the construction line. Due to the water supply being a long away and the locals' lack of firefighting experience, the fire quickly spread to nearby villages. After hearing about the fire, CRBC dispatched sprinklers, organized firefighting crews and eventually put out the fire.

In 2011, despite a tight construction schedule, CRBC organized a professional construction team to restore a rundown airport in Ouesso, a town in the northern Congo, lying on the Sangha River and surrounded by rainforest.

The airport restarted operations later that year, greatly improving transport in the area.

The second phase of Congo No 2 state highway is now under construction, with CRBC offering local people more than 500 jobs. Thanks to strong demand from construction workers for daily necessities and food, more than 300 local traders have started businesses selling fruit, vegetables and consumer goods along the construction line. These businesses have greatly increased the income of local people.

Funded in 2004 by CRBC and the local government with concessionary loans from the Export-Import Bank of China, the factory was established with the aim of easing the shortage of cement in the Republic of Congo.

"We provided the Republic of Congo with a great amount of high-quality cement, keeping the price of cement steady and promoting infrastructure construction," Li Zhihuai, general manager of the cement factory, says.

To contribute to the local area, the factory laid water supply pipes, dug public wells, repaired infrastructure and schools, and even screened films and collected donations for various local projects.

While expanding its market, the factory strengthened its communication with local people, promoting the development of other businesses and the society in general. It established a good image for a Chinese-funded company and helped improve relations between the Chinese and Congolese people.

The cement factory provided great support to the local Loutete hospital by donating cement and regular medical supplies. After a visit to the hospital, factory general manager Li decided to repair the road leading to the hospital, provide cement for repairing the building's walls and floors and supply 20 mattresses and some medicine. Those projects are underway now.

To integrate the factory's presence with the local community and promote the development of the local economy, CRBC sponsored the 2006 MGULL MAKO soccer game, which is an important annual game in the Republic of Congo. The match was televised, providing publicity for the company and creating entertainment for the community.

On weekends, the factory holds film screenings at an open-air cinema. It shows Chinese, US and European films, greatly diversifying the community's cultural life. Hundreds of people attend the screenings.

In 2011, the Chinese-African People's Friendship Association named CRBC as one of the China-Africa Friendship Award Top 10 Chinese enterprises.

"Gratitude and reward are the core principles of CRBC culture," CRBC's Zhang says. "Keeping our social responsibilities in mind at all times, CRBC will continue to promote welfare projects in Africa with great enthusiasm."

Since entering the African market in 1974, CRBC has constructed hundreds of projects in more than 20 nations. Africa is a key market for the company and accounts for 70 percent of CRBC's global presence.

"We are not only a contractor but also an organizer in Africa," Lu Shan, deputy general manager at CRBC, says. "From the original economic and technical aid to the comprehensive projects which the company has completed for African people and countries, our operation in the market has reflected major changes over the years."