Apple Inc notified its two suppliers of the new lower cost iPhone 5C that it's cutting orders of for the fourth quarter, the Wall Street Journal reported.

Taiwan-based Pegatron Corp and Hon Hai Precision Industry Co, two major assemblers for Apple, were told to cut orders of the iPhone 5C this quarter by 20 percent and 33 percent respectively, according to unidentified sources cited by the paper.

Apple shares closed on Wednesday at $501.11 in afternoon trading.

"If Apple is really cutting orders for 5C, then this does suggest that demand is not as strong as hoped," said Andy Tsay, chair for operations management and information systems at the Leavey School of Business at Santa Clara University.

One possibility Tsay said is that potential buyers are seeing price cuts for the 5C already start to happen (in the US), at least for the ones sold with a service contract. "Apparently Best Buy cut the price from $99 to $50, and Target and Walmart are offering discounts as well," he said.

Another possibility Tsay said is customers are not buying the 5C because they are buying the 5S instead, since the 5S is not that much more expensive by comparison.

"Sometimes companies place certain products into the portfolio not with the intention to necessarily sell a lot of that product, but with the direct purpose of making their other products look good by comparison. This is a long-standing strategy in retailing, especially in electronics," he said. "I don't know if this was Apple's intention with the 5C, but this could be the end result." 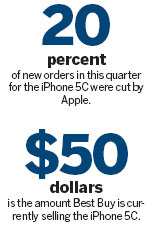 Apple launched a pair of new models - flagship iPhone 5S and the cheaper iPhone 5C in September. According to Consumer Intelligence Research Partners' recent survey, iPhone 5S accounted for 64 percent of total iPhone sales at the end of September, whereas iPhone 5C accounted for 27 percent. That means the 5S is outselling the 5C by more than two to one.

Jan Dawson, chief telecoms analyst at Ovum, believes Apple may well be cutting orders simply because it is now confident that it can meet demand and doesn't need to maintain the rate of production necessary for the big launch.

"I think this is actually the most likely scenario, and the cut reflects a shift from launch to business as usual, rather than an unexpected result on Apple's part," Dawson said, adding that he believes Apple would only cut production if it had enough devices to sell.

"Apple will have planned carefully to meet initial demand for both 5S and 5C, it now has enough 5Cs to meet demand and is focusing on keeping up with the very healthy demand for the 5S," he said. "I would guess demand for both phones is roughly in line with where Apple expected it to be."

China, the second-largest market for the electronics giant and a main target of the new model, was among the markets to sell new iPhones first.

However, with a starting price for the iPhone 5C of $728 in China, Chinese users criticized the pricing as not that much cheaper than the higher-end iPhone 5S, which started at $858.

"I don't think the 5C was overpriced for what it represents, which is essentially just the iPhone 5 from last year in new packaging," Dawson said. "It's not any cheaper to produce than the iPhone 5 was, and as such, unless Apple wanted to take a big cut in margins on the device, it had to price it at roughly this range."

Vivek Wadhwa, vice-president of Innovation and Research at Singularity University, has an entirely different perspective.

"I think that Apple made a strategic error by pricing the 5C so high. If it had priced this at $300, it would have sold like hot cakes," he said.