Xi thanks Clinton for role in ties

In a meeting on Monday with former US President Bill Clinton, Chinese President Xi Jinping thanked Clinton for his efforts in furthering relations between their two nations - both during and after his tenure.

Xi noted the William J. Clinton Foundation's charitable works in China as well as Clinton's efforts to reduce poverty and help develop healthcare, particularly in the prevention of HIV/AIDS. He said developing Sino-US ties requires the support and participation of people from all walks of life in both countries.

"I hope Mr Clinton and his foundation will continue to make contributions and mobilize more people to devote themselves to the cause of bilateral friendship and cooperation," Xi said.

The Chinese president said China-US relations have moved in the right direction to yield positive results.

"Thanks to joint efforts from generations of Chinese and US leaders, bilateral ties have turned into a skyscraper. We need to work together to do more to push the relationship further forward," he said.

Clinton congratulated Xi and the nation on their success in passing sweeping reforms at the Third Plenary Session of the 18th Communist Party of China Central Committee and voiced support for China's new comprehensive plan.

He said he cherished bilateral ties that feature sincerity, mutual trust and constructive cooperation, adding that the two countries should work together to deal with global challenges. 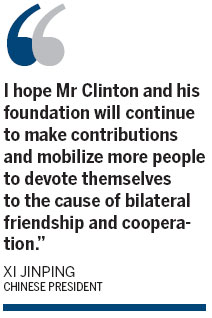 Bill McDermott, co-CEO of SAP AG, the world's largest business software company, who knows Clinton personally, said the meeting of the two "fantastic leaders" would be one of the "most interesting discussions" among global leaders because both are focused on delivering results in facing global challenges.

"This is an innovation-driven world that we are in right now and there are major disruptions in the field of technology, healthcare, natural resources and clearly - I would hope - that one or two ideas that come out of this in the realm of disruptive innovation and how can China, and how can the rest of the world, benefit from some of these things by working more closely together to improve the lives of all people in all cultures and all countries around the world," said McDermott.

During Clinton's presidency between 1993 and 2001, the US had a great period of economic expansion in its history and signed into law the North American Free Trade Agreement.

James Sasser, US ambassador to China from 1995 to 1999 during the Clinton administration, said Clinton was more focused on the Asia-Pacific and China during his presidency than President Obama, who should devote more energy to enhancing the relationship with the region including China.

Before his meeting with Xi, Clinton was in Guangzhou to attend the Global Summit of SME Leaders on Sunday.

In his keynote speech there, Clinton said China should give higher priority to developing small- and medium-sized businesses to increase jobs and boost domestic demand.

"China has vast resources of natural gas that can be tapped through small business operations. The government should have higher standards to make sure that pollution is not caused by such operations," Clinton said.

If small- and medium-sized enterprises invest more in the clean energy sector, they will generate even higher economic growth for China in the years ahead, Clinton said. China's economic growth reform and the country's urbanization drive will create vast opportunities for these businesses, Clinton added.

"It is a good time to be in a small- or medium-sized business in China. China's shift to internal growth and its urbanization process, which will make at least 60 percent of its population live in cities in the next few years, are bringing about huge business opportunities," Clinton said.

Clinton called for more cooperation between small- and medium-sized enterprises around the world to tackle the current shortage of natural resources and climate change.