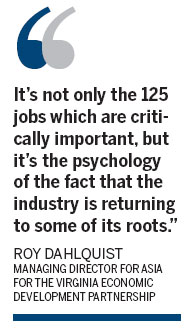 Virginia's furniture-making history helped it entice a Chinese furniture maker to open its first US factory in the state, fending off challenges from three other states, an official with the state's economic development group said.

"We have a workforce in that part of the state that has a heritage in the furniture industry," Roy Dahlquist, managing director for Asia for the Virginia Economic Development Partnership, told China Daily in an interview on Monday. "Having an educated and well trained workforce in that industry was a step up for Virginia in terms of our competition."

Virginia's port system also lured the Chinese investor. "Our Virginia port was important to them - they'll be shipping to other global markets," Dahlquist said.

The state's selection - over Kentucky, West Virginia and Tennessee - comes a year after cabinet maker Merillat closed two plants in the county, resulting in about 300 layoffs. The Chinese company will establish its factory in one of the former Merillat plants, the governor's office said.

"It's not only the 125 jobs which are critically important, but it's the psychology of the fact that the industry is returning to some of its roots," Dahlquist said.

"In Virginia we have a lot of the hardwood that is used. At one time the hardwood was harvested and shipped to China and other countries, made into furniture and returned to the US and sold by big box retailers," he said. "Now they are bringing the manufacturing to where the raw material is, the timber."

Outside North America, China is Virginia's top export destination. It also is the state's top source of imports.

McDonnell, who was not available for an interview, has spent more days visiting China than any other country, Dahlquist said. In his statement, the governor termed the plant win "of utmost importance to the Commonwealth and to Smyth County", given the loss of manufacturing over the years to countries such as China. "Successfully competing against three other states is a great testament to the opportunity (China) sees in the state and region," McDonnell said.

Moving into an existing facility outfitted for furniture making will allow New Ridge to begin production quickly, the governor said.

A privately held, family-owned furniture company established in 1998, Liaoyang Ningfeng operates in Russia and Northeast China and employs more than 550 people. The company, based in Liaoyang, Liaoning province, is a major IKEA supplier in the Asia-Pacific region and makes solid wood bathroom furniture shipped to IKEA stores around the world.

"We were always impressed with Virginia's pro-business investment environment, its excellent infrastructure and strategic geographic location, and the health of its economy," New Ridge President and CEO Zou Xiaohui said.

Under the deal, Liaoyang Ningfeng will spend $2.1 million to establish the factory. A $250,000 grant from the governor's "opportunity fund" was used as an incentive. The Virginia Tobacco Indemnification and Community Revitalization Commission sweetened the state's pitch with $450,000 in Tobacco Region Opportunity Funds.

"We will work hard to grow and succeed with the communities of which we are now part," Zou said.

The Virginia factory will make furniture components for the Chinese market, supply European customers with finished products from the US, and make and sell products for the US market. The company aims to expand into lumber production and export to China, according to a release.

The project will go "a long way" toward replacing the jobs that were lost when Merillat closed its plants, he said.

US troops may leave if no deal in Afghanistan