Beijing says the US did not make the WTO required explanations

China on Tuesday requested a consultation with the United States at the World Trade Organization regarding alleged misconduct by the US in 13 anti-dumping measures in recent years, Chinese commerce officials said.

The consultation request, the first WTO dispute case between the world's top two economies this year, suggests China has advanced in its approach in challenging US trade mechanisms and is guarding against frequent trade remedy measures, analysts said.

"The US Commerce Department has obviously conducted itself incorrectly," Yang Guohua, deputy director of the department of treaty and law at the Ministry of Commerce, told reporters in Beijing. "In its anti-dumping measures, its actions were inconsistent with the WTO rules, which caused big problems for Chinese enterprises and disrupted normal bilateral trade."

Yang said that the US "did not meet the WTO requirements and make sufficient explanations" when putting Chinese enterprises under "targeted dumping", a WTO rule exception stating that Chinese exporters overall did not sell products to the US market at less than the normal value in China, but instead is dumping its products in a specific region, period or with specific purchasers.

The US Commerce Department was also criticized for refusing to give separate rates to Chinese enterprises in the anti-dumping cases, according to Yang.

"We are challenging the mistakes in the US trade mechanism and aim to root out US misconduct from now on," said Chen Yusong, a director of the department.

"We are very confident in winning WTO support in the dispute because the US actions obviously run against the WTO rules," Yang said. 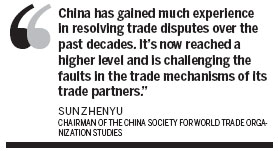 Since joining the WTO in 2001, China had launched a total of 12 complaints under the WTO's Dispute Settlement Body by December and won the body's support in all but one case, according to Yang. The country was a respondent in 19 disputes under the body with major challenges coming from the US, the European Union, Japan and Mexico, Yang said.

Debra Steger, a WTO expert with the Centre for International Governance Innovation in Canada, said the consultation request may deal with a case that has already been decided against China.

"However, the legal issues have already been decided by the WTO Appellate Body, and the US has changed its regulations relating to the practice of 'zeroing'," said Steger, who served as one of the architects of the WTO as a senior negotiator for Canada during the Uruguay Round - the 8th round of multilateral trade negotiations conducted within the framework of the General Agreement on Tariffs and Trade from 1986 to 1994.

"If it applied that practice in these cases, then the case by China may be interesting. However, there is always a question about whether there is a remedy in a WTO anti-dumping case even if a complainant should be successful on the legal claims," said Steger.

Sun Zhenyu, chairman of the China Society for World Trade Organization Studies, said the US was often found to "act in a manner inconsistent with the WTO rules".

"The Chinese Commerce Ministry concluded the US employed technical misconduct by putting the 13 cases in a package and requesting a consultation with the DSB (the WTO's Dispute Settlement Body)," Sun said.

"China has gained much experience in resolving trade disputes over the past decades. It's now reached a higher level and is challenging the faults in the trade mechanisms of its trade partners," Sun added.

Steger said the world's two largest economies have been bringing an increasing number of anti-dumping and countervailing duty cases against each other and this trend is likely to continue.

"WTO trade remedy cases, however, may render decisions containing legal principles but they often do not provide a resolution in the particular case at issue due to the nature of national anti-dumping/countervail regimes," said Steger.

New urbanization plan on the way