A lifelong fascination with Chinese law

Born in 1949 in Canton, Ohio, Robert Berring never thought the People's Republic of China - established in the same year - would influence his whole life across the Pacific Ocean so deeply.

A noted legal scholar, he has taught a course entitled Chinese Law and Society to undergraduates at UC-Berkeley for the past 30 years. A total of 150 people take the class each spring - the limit the room holds. He also teaches Chinese law at Berkeley's law school.

"No one should graduate from an elite institution like Berkeley without understanding something of China," he told China Daily USA. "The course has changed a great deal over the years, as China has changed."

"Some colleagues have asked me how I could teach the same course for thirty years. But it is not the same course. China has accomplished so much, changed in so many ways, that it is a new course each time," he said.

"Today, I recall standing on the Shanghai Bund as a Chinese friend explained all the wonders that would be built in Pudong, some laughed, but China did it," he said. "China is always on the move."

Berring first encountered the study of China during his freshman year at Harvard College. On the advice of a friend, he enrolled in a course that was taught by Professor John Fairbanks and his deep fascination with China began.

He fell in love with the Chinese language quickly, and two summers at Middlebury honed the classroom skills that he gained at Harvard.

"China was a world filled with incredible history, complete with the greatest heroes, most evil villains and endless achievements," he said. "It pulled me in.

"The Chinese view of history, grounded in a polity that had endured for millennia, fascinated me. What perspective could the American experience bring when the nation had not even lasted as long as a single Chinese dynasty?"

In 1971, he received his undergraduate degree from Harvard. Three years later, he got his law degree from Berkeley, as well as a degree in library sciences.

In law school, both at Harvard and Berkeley, he was able to work with three important scholars who were specialists in the Chinese legal system - Jerome Cohen, Randy Edwards and Stanley Lubman. "Though we ultimately disagreed about many things, they were precious mentors," he said.

He began to teach Chinese law in 1980, which was also the first time he visited China.

"China in those days, with Deng's major reforms just in the offing, was a very different place," he recalled.

"I was able to meet Wang Tieya, one of my heroes, when I stayed at the foreign guest house at Peking University", he said. An eminent Chinese jurist, Wang was one of the leading authorities on international law in China and a judge on the International Criminal Tribunal for the former Yugoslavia. 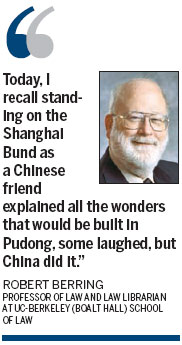 During the same visit, seeing the memorial to Li Dazhao in China also held deep meaning for Berring. "The librarian who had helped found the Chinese communist party was a special hero. For many years, I was both a law librarian and a professor, so I used Li in many talks," he said.

Throughout the 1980s and 90s, Berring travelled to different parts of China, lecturing on law, library science and computers.

He still remembers going to Beijing to run a conference in the 1980s. The Chinese side wanted to be paid in US dollars, so Berring brought $19,000 cash. Their flight landed late and they arrived at hotel in the middle of the night.

"As we walked down the street, with our pockets full of the cash, I said that I was worried. My host assured me that there were no thieves in China, and in that time and place there were not," he said.

"For a time, I was the San Francisco contact for a variety of exchange programs with China. When someone arrived at the San Francisco airport, I would make sure that they were taken care of," he said. "I have enjoyed the friendship of so many Chinese scholars."

Minister: US 'key' to global recovery