Will LinkedIn make it in China? 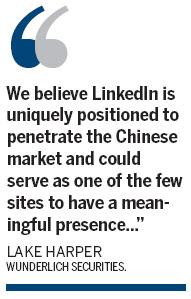 Professional networking site LinkedIn Corp appears to be making preparations to start operations in China, the country with the world's largest Internet population.

The California-based firm has made some major moves recently that have been seen as steps towards officially expanding its service into China. The company announcedit has hired Derek Shen, founder of Nuomi.com, a Chinese website similar to Groupon, to head its Chinese operations. It also started to integrate with China's popular mobile messaging app WeChat weeks ago.

"We believe LinkedIn is uniquely positioned to penetrate the Chinese market and could serve as one of the few sites to have a meaningful presence in both the People's Republic of China and many Western markets," said Blake Harper, an analyst with Wunderlich Securities.

Harper expects the company's expansion into China to move slowly and methodically.

"We expect the company to continue to take it slow with its Chinese development efforts and any impact to the member or corporate customer base is likely longer term," he said.

Founded in 2003, LinkedIn has grown to be the world's largest professional network on the Internet with more than 200 million members. While LinkedIn has no Chinese-language site yet, it does have 4 million registered users from the country.

China is home to 618 million Internet users and 500 million mobile web users as of the end of last year. However, China is proving to be a tough nut to crack for some of the world's biggest web players.

"eBay, Yahoo!, and Google have essentially failed in China and Amazon is facing stiff competition as the Chinese appear to have a preference for local, home based companies," said Victor Anthony, an analyst with Topeka Capital Markets.

LinkedIn would be entering a market as similar local websites are racing to take advantage of the heated job-recruitment market. For instance, 51job.com, China's leading online recruitment company, claimed it had more than 73 million registered users in 2013. Other popular Chinese recruiting agencies including zhaopin.com and chinahr.com also hold a significant share of the market.

Will LinkedIn be the one that succeeds? Anthony said that remains to be seen and much depends on whether or not a Chinese upstart enters the market with a similar and compelling offering.

Anthony said based on what he has seen over the past 12 years following the Internet media space and watching US based Internet companies enter China, he does believe that competition will follow LinkedIn.

US braces for falling deficit