To Kenneth Lieberthal, one of the top China hands in the United States, the government work report delivered by Premier Li Keqiang at the opening session of the National People's Congress on Wednesday reaffirmed goals that have already been set.

"The message is that the Third Plenum goals are serious. We will move ahead on that," said Lieberthal, a senior fellow in foreign policy and global economy and development at the Brookings Institution.

He was referring to the economic and social reform goals rolled out by the Third Plenum of the 18th Central Committee of the Communist Party of China in November.

"The analysis of the economy, I think, is right. The directions they have to move in overall are necessary and important. The desire to do that over a period of five to 10 years, I think, is also right. If you do it very quickly, you will fail," said Lieberthal, who served as special assistant to the president for national security affairs and was senior director for Asia at the US National Security Council during the Clinton administration.

Lieberthal praised the work report for having strong goals but said implementation will be critically important and that he hoped to see more details from the work report. 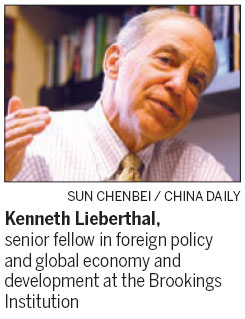 "That kind of thing will ultimately be very important," he said.

Zheng Xinli, permanent vice-chairman of the China Center for International Economic Exchanges and a former senior economic policy adviser to the central government, quoted President Xi Jinping as saying that leaders at various levels should spend 90 percent of their time on implementation.

The author of 24 books and monographs mostly on China, Lieberthal said he was a bit surprised that there wasn't a big increase in allocations for environmental issues, given the strong priority being voiced for improving the environment. The budgetary increase of 7.1 percent represents one of the lowest percentage increases in different categories.

He was also concerned that China will guarantee the 7.5 percent GDP growth set for 2014 with investment.

To Lieberthal, that might contradict the goal of China's reform, which is to reduce reliance on exports and investment in favor of increasing household consumption as a demand driver and expanding services.

Lieberthal believes the reforms China laid out in the government work report and the Third Plenum will help improve US-China economic relations if carried out correctly.

"If you look at the advice and suggestions US officials have made to their Chinese counterparts in meetings over the past seven or eight years, they are almost without exception in the direction of what the Third Plenum resolution says China now seeks to do," he said.

"That's a good development as far as (the US is) concerned,"

In Lieberthal's view, the talks on a bilateral investment treaty successfully negotiated by China and the US will help benefit both sides.

In Washington on Friday, the two countries concluded their four-day 12th round of talks on the BIT.