Stephen Orlins, one of the leading China watchers in the United States, lives on Beijing time these days.

He has been busy following the coverage of China's National People's Congress (NPC) and the Chinese People's Political Consultative Conference.

"I get CCTV 4 (a Chinese news channel) at home, watching every night as I go to sleep and seeing it every morning," said Orlins, president of the New York-based National Committee on US-China Relations.

"I guess I'm one of the few Americans who does this," he said as he examined a newspaper page featuring some key policies discussed during the ongoing sessions. 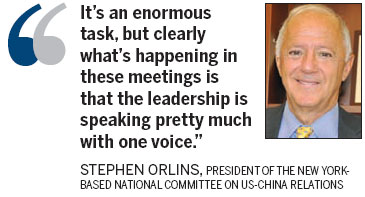 But for Orlins, who has led the committee since 2005 and has devoted almost 40 years to promoting US-China relations, it is important to follow the two sessions.

"It's very interesting to see the interviews with the delegates and the press conferences," he noted. "It's a much more open, public process, and it's more media-conscious than it has been historically."

The committee that Orlins leads also conducts some projects with the National People's Congress, including an annual visit he makes with a group of four US congressmen - Democrats and Republicans - to several Chinese cities and to meet deputies to the NPC.

"So in my role, it's perfectly normal and natural that I follow it this closely," he said.

"It's the next process of reform that we've seen - the 12th Five Year Plan, the Third Plenum and now we are seeing the two sessions. So it's a continuation of this process, and it's been fairly consistent in terms of what they have tried to implement," he said.

Among major issues - including economic reform, urbanization and rural development - discussed in the sessions, Orlins, like many others, pays particular attention to discussions on environmental protection.

He said the coverage of President Xi Jinping with delegates from Guangdong and Shanghai discussing the reduction of particulate matter emission levels shows that the country's leader cares about the pollution problem.

"They are trying to pass laws, which will allow for tighter controls of pollution," said Orlins, a former lawyer who taught contract law for the Beijing municipal government in 1979.

"It's an enormous task, but clearly what's happening in these meetings is that the leadership is speaking pretty much with one voice."

The key policy objective of environmental protection from this year's sessions says the government will fight pollution by focusing on improving the industrial structure, raising energy efficiency, reducing vehicle exhaust emissions and preventing and monitoring wind-borne dust. It will start by reducing PM10 and PM2.5 emissions, and a plan for clean water.

"I think the focus is correct; the issue, as always, in China is the implementation," said Orlins. "It's a tough issue because it affects economic growth," he said, adding that China's growth should focus on quality not quantity.

On the question of local government implementation of anti-pollution laws, Orlins said: "It's a test."