The search for Malaysian Airlines Flight MH370 entered its fourth day as more planes and ships - and even satellites - sought to find any trace of the lost airliner.

With no confirmation that the Boeing 777 had crashed, hundreds of distraught relatives of passengers waited anxiously for any news.

And with no trace of the plane, no sign of trouble before the flight disappeared and no distress signal sent, speculation on what happened was rampant, including catastrophic failure of the engines or plane structure, extreme turbulence, pilot error or an explosion.

No group has claimed responsibility for the plane disappearing.

CBS News reported Monday that "at this point in the investigation, multiple US intelligence agencies tell CBS News they are not seeing any credible claims of terrorist involvement".

Though US surveillance data from the Pentagon also uncovered no sign of a midair explosion, the head of the organization that monitors the nuclear test ban treaty said Monday he asked their experts to see if they detected any high altitude explosions that might have been the missing plane.

Zerbo said infrasound would be the best technology to check for an explosion on the missing plane if there was a monitoring station nearby, "or the explosion is at a level or at an amplitude that it could be detected".

Arnold Reiner, a retired captain with US Airways and the former chief accident investigator at Pan Am, told the New York Times: "If they somehow got turned around or went off course when the thing was going down, it could be 90 or 100 miles away from where the flight data disappeared."

Interpol - the International Criminal Police Organisation - confirmed that two European passports, both of which were reported as stolen in Thailand in 2012 and 2013 respectively, were used by two of the passengers on board the missing plane. Both passengers were male and purchased tickets for the flight at the same time.

The use of fake or stolen passports does not immediately tie the disappearance of the Malaysia jetliner to a terrorist attack, CBS News said.

At least 40 aircraft and 40 ships from nine countries - Vietnam, China, Singapore, Indonesia, the United States, Thailand, Australia, New Zealand and the Philippines - searched an area that had been expanded to a 100-nautical-mile radius from the point the plane vanished, baut the only discoveries so far have been false alarms.

Bloomberg News reported that Malaysia had dispatched ships to check debris in the South China Sea. The waters off Vietnam's coast became a target after some objects were spotted on the surface. That shifted the inquiry east of the planned route for Flight 370 after focusing on the Gulf of Thailand, where an oil slick once seen as a possible crash marker turned out to be marine fuel.

Vietnam's Vinasat-1 satellite was to take pictures of the Tho Chu Island area - in the Gulf of Thailand where oil slicks once drew search teams' attention - according to the country's Infonet news website. China also is deploying satellites to assist, the Xinhua news agency reported.

The Boeing 777-200 aircraft left Kuala Lumpur International Airport at 0:41 am Beijing time on Saturday and was scheduled to land in Beijing at 6:30 am Contact with the flight was lost along with its radar signal at 2:40 am midway between Malaysia's east coast and the southern tip of Vietnam.

Among the three missing American passengers were two children, and Philip Wood, a 50-year-old IBM executive, who had just come from Texas where he was visiting family, on his way to Beijing.

Twenty passengers on the plane worked for the Austin, Texas, company Freescale Semiconductor. Another passenger, Chng Mei Ling, worked as an engineer for the Pennsylvania company Flexsys America LP. 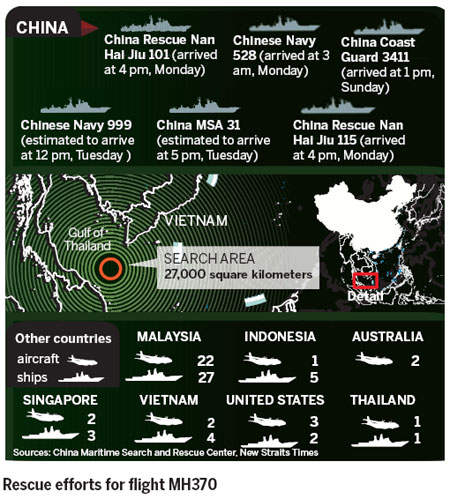