Chinese have outspent Russian buyers in acquiring Manhattan real estate for the first time, and the city's real estate brokerages are doing all they can to woo more of them, from hiring China-born brokers to taking classes on the business practices of Chinese.

"The economy crash at this end gave us the opportunity to show up outside of the US, looking for buyers in real estate in New York, because we were on hold. We had a really weak market at that time," Nikki Field, senior global real estate adviser at Sotheby's International Realty, said of the financial crisis in 2008 that hit the housing market particularly hard.

Forming relationships with Chinese buyers was difficult at first because Field and her partner, Kevin Brown, are Westerners, she said, but given the plethora of newly-minted high net-worth individuals in China, Field said she and her team made sure to adapt to their Chinese clients.

"We had to change our skill sets totally. Business styles to the Asians are quite different from the Western styles. We had to learn, as best we could, how to understand the culture and protocol of doing business with Asians," she said.

Field and Brown took classes at the Confucius Institute for Business at the State University of New York, which trains American professionals on the business practices of Chinese. The team tried to learn the language as well as some of the cultural nuances of conducting business with the Chinese, because they "learned that the Chinese were not going to adapt to Western styles that easily," Field said.

Field also hired Chinese-born brokers who were licensed New York real estate agents, and recently added Daniel Chang as the head of the Asia desk on Field's team, who came from working with ultra high net-worth Chinese families and individuals at HSBC.

Arthur Hung, senior broker at Sotheby's International Realty, said that he has noticed real estate companies putting up multilingual websites or allowing potential clients to pick brokers by language. Brokerages are also advertising extensively in Chinese-language media, both domestically and abroad, and even developers are looking at international marketing in Hong Kong and China, he said.

Chinese-American brokers are also finding that they have an edge with the influx of investors coming from mainland China. 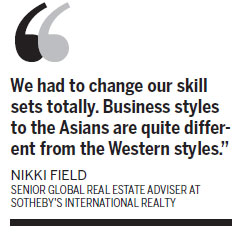 "I think it's easier for them to communicate their express wishes," said Elaine Hu, a broker at Town Real Estate in New York. "There are also other elements important to them, like fengshui, that maybe they think an agent such as myself would be more understanding of compared to an agent from different background."

Hu lived and worked in Asia for a few years and said that learning about locals and their desires in real estate has helped her on the job at Town.

Nelson Lee, principal broker for New York-based Blu Realty Group, has focused primarily on the financing side of real estate acquisitions, but in the last couple of years, saw the increase in Chinese buyers and how he can be involved.

"Everybody that comes here to buy happens to be Chinese, so taking advantage of my ethnicity, I've been helping Chinese nationals regarding financing and applying for commercial residential properties here in Manhattan," he said. Blu Realty Group recently launched a mortgage program that lends to foreign nationals for high-end luxury homes.

Theresa Wu, also at Town, said that being Chinese American is beneficial from the culture perspective, not only language.

"For me, it's not just about the language really but the culture. There's a difference between just being able to speak the languages and then actually being able to translate cultural nuances. I think knowing the culture is a bigger advantage, on both the Chinese and the American side," she said.

Hung said that there is an "unspoken understanding" of Chinese clients' real estate desires. Chinese buyers tend to like properties with lots of southern exposure, and those that have kitchens that vent out, due to considerations of Chinese cooking, he said.

US sanctions on Chinese businesses opposed