Collaboration is the best way to advance biopharmaceutical research and there remains ample opportunity for scientists in the US and China to work together on developing new medicines and technologies to combat diseases.

That was the message from the Chinese Biopharmaceutical Association-USA (CBA), which held its 19th annual conference at the University of Maryland on June 21.

One of the largest Chinese American professional associations, this year's conference was designed to address the importance of innovation and worldwide collaboration to capture opportunities for advancing modern medicine and biopharmaceuticals.

"CBA has been dedicated to promoting technology transfer and business collaborations among different countries and regions, especially between the United States and China," said Ziping Wei, president of the CBA.

"With increasing interaction between the two countries, I have seen many Chinese students graduate from US universities and go back to China to contribute to the field. On the other hand, an abundance of Chinese companies have started to open businesses in the US to bring their great products," said Wei. "It is not like that if you are in US, you can't contribute to China. Here a person also can help strengthen scientific partnerships with US." 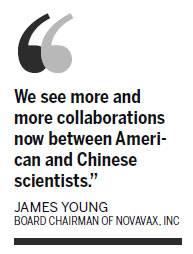 James Young, board chairman at Novavax, Inc, a biopharmaceutical company based in Gaithersburg, Maryland, said: "There is a great collaboration between science and the exchange of students and post-doctors. It helps foster the US-China relationship."

Young, who first went to China in 1978, has witnessed changes in scientific cooperation.

"We see more and more collaborations now between American and Chinese scientists," he said. "It is a huge opening now for cooperation between the two countries, compared to the 1970s when there was no collaboration. Lots of students from China in the US go back to China to start companies and introduce the high science.

"And now we see those scientists in China come back with good scientific studies being done in China to help science around the world."

The conference provided a venue for entrepreneurs and biomedical researchers from government agencies, private agencies, start-ups, biotech and pharmaceutical companies to exchange information on policy issues, business development and partnership opportunities in the US and China.

CBA presented its 2014 Brilliant Achievement Award at the Conference, recognizing individuals of exemplary accomplishments in promoting collaboration and global development involving the biopharmaceutical sector in China.