The agreement between China and the United States for US financial accounts registered at banks in China to send their tax reports to the US Internal Revenue Service (IRS) to curb offshore tax evasion will have positive effects for China, experts said.

The agreement will also enable Beijing to obtain information on mainland taxpayers in the US to help fight against tax evasion and corruption.

"No doubt, the news is positive and will aide China's anti-corruption efforts in its financial institutions," said Zeng Zhaoning, an economist at Xi'an Shiyou University, in a June 29 report by Huashang Daily, which is based in Shaanxi province. "The wealthy in China are obtaining foreign nationalities for their children and spouses to illicitly transfer income to foreign financial institutions in an attempt to escape tax reviews by the Chinese government."

Beijing Economic Research Institute Chairman Gong Chengyu said that overall, Chinese citizens in the United States have more accounts than US citizens in China, "so in the long run, it is more beneficial for China".

Under the agreement announced on June 26 by the US Treasury, US financial accounts will report their taxes directly to the Chinese government, which will then file them to the IRS. In the past, the accounts were only required to be reported to the foreign country's government.

The two countries agreed on the terms, but are reviewing before officially signing it. The new agreement will remove the threat of blacklisting or penalties that have been hanging over Chinese financial institutions, including institutions in Hong Kong, the US and other subsidiaries in the Chinese mainland.

The US government's implementation of the 2010 Foreign Account Tax Compliance Act (FATCA) is to curb offshore taxes that were previously not reported. Around 80,000 banks and other financial institutions have agreed to start reporting to the IRS on US-owned foreign accounts by July 1.

FATCA is a US law that requires financial institutions around the world to provide information on US taxpayers to the US government. The Treasury Department said on its website that Beijing had reached an "in substance" intergovernmental agreement Model 1 (IGA 1) with the US.

Under the act, financial firms around the world are required to report to the IRS information on clients who are US taxpayers. Those that fail to do so would face a 30-percent withholding tax on their US income. The law's definition of a "US person" includes green-card holders and anyone with a substantial connection to the country. 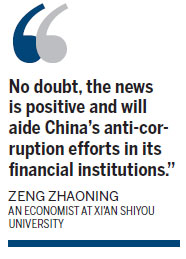 Agreements have been signed by the US with governments in 80 countries including almost all major economies, a senior Treasury official said. The agreements will allow banks to turn over account information to their governments instead of handing it directly to the US - a potential violation of privacy rules in some countries.

In the past, Chinese officials expressed concerns about the potential burdens of complying with FATCA. The US has used intergovernmental agreements to simplify compliance.

"The conclusion of a model 1 IGA with China is a very significant development,"said Manal Corwin, principal-In-charge of Washington National Tax-International Tax Policy at KPMG LLP and former deputy assistant secretary for tax policy for international affairs at the US Treasury Department. "The IGA will remove obstacles to compliance with FATCA and will allow Chinese financial institutions to avoid withholding under FATCA through direct reporting of information to the Chinese government."

A tax consultant in the US, who is familiar with the situation, said: "My understanding is that FATCA is aimed at shutting down tax planning by US persons that avoid US tax by shifting income to non-US banks outside of the visibility of the IRS."

The consultant said: "This tax planning is primarily directed towards lower tax jurisdictions such as Switzerland. In my experience, since China imposes relatively high corporate and individual income tax rates on Chinese entities, citizens and Chinese domiciled persons, the opportunity for US tax avoidance is not as great, and as such, not as large of a focus of the FATCA program."

China to increase personnel for peace

DPRK to put two Americans on trial for hostile acts