He Konghua: The "sister" of cultural exchange

San Francisco businesswoman and community leader He Konghua was born in 1949 in Beijing, the same year that the People's Republic of China was founded and the whole nation embraced a new era. This coincidence in timing might explain her deep and abiding love for the motherland.

Her typical day is intertwined with conferences, meetings and lots of talk. "Sometimes I have to take part in three events on a whirlwind schedule and have no time to sit and eat," said 65-year-old He, adding that she enjoys the process of tackling and solving difficult problems with people of similar mind.

Intensely involved in community activities, He is chairwoman of the Greater China Woman's Association, a board member of the All-China Federation of Returned Overseas Chinese, vice-president of the Silicon Valley People's Republic of China Celebration Committee and a founding member and vice-president of Chinese for Peaceful Unification - Northern California.

He defines herself as a person on a mission of social responsibility. "I don't know why, but I just feel that I should be committed to letting more Americans, including Asian Americans, better understand the nature and essence of Chinese culture," she said.

On three fronts - China-US cultural exchanges, the cross-straits relationship between Chinese mainland and Taiwan and people-to-people exchanges - He has endeavored to help refine China-US friendship and promote bilateral understanding between peoples of the two largest economies in the world.

Many Asian Americans in the Bay Area call He "sister". "Anyone close to her feels a natural affinity," said Betty Yuan, CEO of the Northern California Chinese Culture-Athletic Federation, to which He has donated time as a volunteer.

"In my opinion, He is an outstanding community leader because of her profound knowledge of China and the US, her close connections to different organizations at home and abroad, and, most importantly, her determination, agility and ability to execute projects in a professional and efficient manner," Yuan said.

As a first generation Chinese immigrant to the US, He started from scratch in the early 1980s when her husband quit his job as a professor at Tsinghua University and came to the US for further study.

She faced a string of hardships in the beginning - English illiteracy, financial constraints, prejudice against Chinese and worries over residency status. She shrugged them all off and kept striving toward the family's American Dream, she said.

Like many Chinese immigrants "fresh off the boat", He opened a restaurant in Chinatown specializing in Sichuan-style spicy food and earned regular customers. "To me that was not only a business, but a way to spread Chinese culture," said He. "Culture knows no boundaries."

He told her patrons about the Chinese way of combining ingredients, nutritional balance, traditional wisdom expressed in such maxims as "Eat not to dullness, drink not to elevation" and the five basic elements of traditional Chinese medicine. 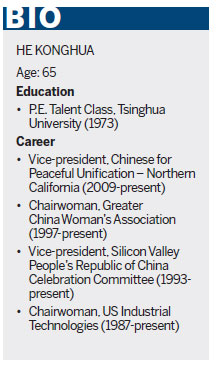 Inspired by the success of her restaurant in Chinatown, He decided to expand to other parts of the Bay Area. From Berkeley to San Jose, she opened five more restaurants, some of which are still operating.

"Culture is the universal language of humanity and food connects people around the world," said He.

In 1987 He and her husband established the US Industrial Technologies Inc (USIT), a company specializing in industrial technological consulting, market research, technical development and exchanges between China and the US.

At the time, economic and technical cooperation and exchanges between the two countries were few and far between, said He, adding that China's long-held closed-door policy was a drag on the nation's economy.

"As graduates of Tsinghua University and Chinese, we wanted to do our part to help China advance in its modernization drive," said He. "We believe China and the US will both benefit from frequent and systematic communications and exchanges."

Every year, USIT handles around 1,000 delegations from China and helps arrange their US visits and training programs at universities, companies and government organizations.

USIT also helps US companies wanting to do business in China cope with adaptation issues. "We get them attuned to all sorts of issues special to China, from the environment and business norms to social rituals, policies and regulations," said He, who has a China national flag hanging on the wall of her Silicon Valley office.

In 1999, China's State Bureau of Foreign Experts Affairs issued USIT an authorization license numbered 0001. "We were the first contracted overseas partner that they outsourced their important training to," He explained.

In 1993, when Beijing joined in the fierce competition for hosting the 27th Olympic Games and was tarnished by negative international publicity, He felt she needed to play a role in helping repair the country's image.

"China is a great country with great people. We are good-natured, industrious, down-to-earth and peace-loving. Why were there so many misconceptions and fabrications?" said He. "I thought, maybe I can start fixing that with cultural performances featuring Chinese songs, dances and the basic ideas of simplicity and beauty - all about the real China."

He wrote a letter to Ai Zhisheng, then minister of radio, film and television who oversaw all performing troupes in China, asking for assistance. "All of the State-level resources were at his disposal. This was the right person to turn to," said He, adding that she got emotional trying to finish the letter.

Ai wrote back with the same amount of emotion offering concrete support. His ministry agreed to send the nation's best artists to San Francisco for a gala He had planned called "China Night".

A humble and small-scale idea of promoting China's culture turned out to be a grand-scale, state-of-the-art cultural feast. The program included performances of the Yellow River Cantata and solos like At the Place Where Peach Blossoms Bloom, On the Hopeful Field and I Love Snow on the Northern Border - all well-loved Chinese classics.

"All of Silicon Valley turned out to welcome our artists," said He. "A flood of people swamped the theater and there was an outpouring of compatriotism among Chinese Americans. I knew I had done the right thing."

In the 20 years since, He has kept orchestrating similar Chinese cultural performances in North America to entertain Asian American communities and educate generations of Chinese about their cultural heritage.

This year as China celebrates its 65th birthday in October and the 35th anniversary of the establishment of the China-US relationship, He plans to throw an even bigger gala for the two countries. "Let's celebrate!" she said. "It's harvest time!"

Minister: US 'key' to global recovery