Beijing and Caracas signed more than $5 billion in financial agreements on Monday to support the South American country's social and economic development, as President Xi Jinping concluded his first-ever visit to the country.

The accords include a second-round operation of a $4 billion financial agreement between the two countries, and $690 million development loan for geological exploration of gold and copper.

The agreements are among a total of 38 deals reached as the two countries concluded a high-level meeting that guided bilateral cooperation.

The 13th meeting of the China-Venezuela High-Level Joint Commission saw company executives and government agents sign documents at the closing ceremony for cooperation in energy and mining, finance, infrastructure construction, agriculture, high technology and other fields.

Among the notable agreements is that the two sides will cooperate on a satellite project in Venezuela. China has launched two satellites for Venezuela since 2008, which have been helping the country in areas like television service, city planning, resource survey, environmental protection and disaster relief.

Under the latest agreement, Venezuelan scientists will participate in the design and test process for the first time, which analysts said marks the entry of bilateral cooperation into a new stage of joint research and development.

In 2013, China transferred a telecom satellite facility it had built in Venezuela to the Venezuelan side after completing training of engineers for the country.

The agreements also include a contract for 4,512 flats to be built by Chinese companies for Venezuela.

Xi said at the closing ceremony that the cooperation agreements signed Monday are like concrete steps that build the development path of the two sides' comprehensive strategic partnership.

According to Xi, more than 200 development agreements have been signed by China and Venezuela during the past 10 years.

Venezuelan President Nicolas Maduro said so far about $45 billion in financial agreements with China have supported more than 400 projects in Venezuela in such sectors as industry, agriculture, social development, water transportation and aviation.

"We know that cooperation with China has not brought us debt, but greater development," Maduro said through a translator.

Su Zhenxing, a senior research fellow on Latin American studies at the Chinese Academy of Social Sciences, noted that investment and financial cooperation "have been given more priority than a decade ago".

"A range of issues addressed and cooperative pacts signed during the trip have signaled greater scope and depth of two way collaboration... Today we see three driving forces-investment, finance and trade. It is a great change," Su said.

Wang Zhen, former Chinese ambassador to Venezuela, said energy is a traditional focus for bilateral cooperation, yet these days "there are far more other themes that shape the collaboration", including infrastructure construction and contracting. 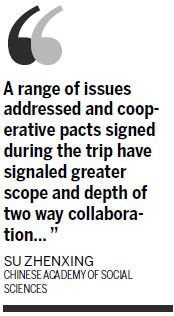 "A range of infrastructure projects intended for improving livelihood of local people - water pipelines, agricultural technologies, housing projects - have brought tangible convenience to the ordinary Venezuela people, and have boosted a better national image of China in their minds," Wang said.

The two countries have made great progress in financial cooperation, and Wang estimated that the massive bilateral financing plan may further expand its scale.

Experts also hailed the importance of boosting bilateral political coordination through more top-level talks and contacts. "There are considerable similarities or shared views between the two strategic partners when it comes to major issues in the world and fundamental conception regarding diplomatic policies," Su said, adding that the two sides should expand political contacts to further expand consensus.

Later Monday, Xi headed to Cuba, where he will also bring a group of Chinese business leaders there for investment and cooperation opportunities. Xi will spend two days in Cuba, the last stop of his tour.