Michael Meyer decided to write a book about his wife's hometown, a village called dahuangdi, or "Wasteland", in Northeastern China's Jilin province, as he saw books and news coverage were too much about China's urban areas. He stayed there from 2010 to 2012, and what he got was more than expected.

"I moved to Wasteland thinking I would write only about the village, and about a single plot of land," Meyer wrote in an e-mail to China Daily about his book In Manchuria: A Village Called Wasteland and the Transformation of Rural China published Tuesday. "But people's stories kept alluding to historical events outside the village."

"Manchuria" is the old name for Northeastern China, including eastern Inner Mongolia. The place, as the Minnesota-born writer found, is in many ways similar to his home state: the chilly climate often goes below -20 degrees Fahrenheit in winter, and there are qualities of high hospitality and overcompensation, just like "Minnesota nice".

Popular small-talk questions to strangers in the area include where they came from, when they were born and their heights. So, Meyer kept saying "American, 1.86 meters, Year of the Rat."

The region used to be the home of the Manchu, an ethnic group living in the area that later founded the Qing Dynasty, which spanned the mid-17th century to the early 20th century.

"Its relatively short regional history illustrates modern China's," said Meyer. The final years of the dynasty saw China struggle with foreign powers. The region was then occupied by warlords and annexed by Japan in 1931.

After the People's Republic of China was founded in 1949, the region became the frontier of the Korean War, industrialization, and layoffs in the late 1990s, as the government decided not to support money-losing State-owned enterprises.

"I didn't expect that in Wasteland I would glimpse the nation's future," Meyer wrote

The village's name coincided with T. S. Eliot's The Waste Land but the village is lively.

"The poem begins, 'April is the cruelest month.' But in the village, April was the beginning of life," said Meyer. "The poem is at the forefront of Modernism, and so is the village, when it comes to agriculture, at least."

When Meyer arrived in the village, China already had allowed farmers to transfer their land-use rights to support mass-scale operations with higher efficiency. A company called Eastern Fortune Rice rose during the time.

The company encouraged local farmers to transfer their land-use rights to the company. In return, the company would pay them an annual lease for the land, put them into modern apartments, and employ them.

The vision of Boss Liu, head of Eastern Fortune Rice, is to offer his fellow villagers an American-style township life. Most farmers were happy with the plan. The house where Meyer was living has been torn down, as his landlord moved into an apartment and became the company's employee.

His departure from Wasteland in 2012 "could not have been more joyous", said Meyer, as his wife was pregnant, something villagers had been eager to hear for years. They now want to see their son, and the Meyers are planning a trip to Wasteland.

Meyer is living with his wife, Frances, in Singapore. He is on a book tour and will speak at the New York Public Library on Tuesday and the Asia Society in New York on Wednesday.

Lu Huiquan in New York contributed to this report. 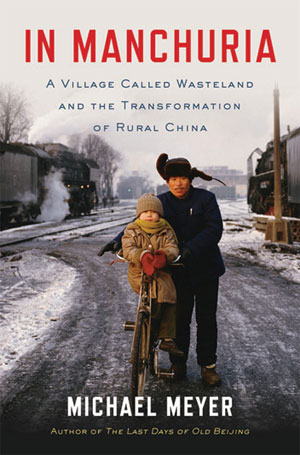 Growing up recluse in a dazzling world of Manhattan

2 deadly shootings within hours in Copenhagen