"Good design can bring about social and environmental change. Being surrounded by beauty evokes positive emotions. This, in turn, encourages us to live better and be better."-LulyYang

Her self-named store on Fourth Avenue in downtown Seattle, which sells her evening and bridal designs, opened in 2000. Since then, Yang's designs have earned her a successful business and recognition. She has been named Best Couture Dress Designer by Seattle Bride Magazine for twelve consecutive years and was awarded Nellie Cashman's Women Business Owner of the Year award.

Although Seattle is not known as a fashion mecca, Yang decided to start her fashion career in the city where she grew up and lives with her family.

"I saw a need and passion for fashion business here, and I believe we have so many women with fabulous taste and their own personal style,"she told China Daily.

As for what makes a really good fashion designer, Yang said,"Being open minded and keeping curiosity alive." She said she constantly gets ideas and inspiration from music, travel, movies and everything else around her. "Also, I am always inspired by Asian culture and influences, integrating it into the soul of my pieces," said Yang, who is Chinese American and comes from a family of designers.

"I was inspired by the palaces and the story of Xi Shi, one of the renowned Four Beauties of Ancient China,"she said. After a trip to Shanghai with her family, she designed her Passage to Shanghai collection, which was the first of her now highly anticipated annual couture shows, on September 21, 2006.

Born in Taiwan, Yang's family moved to Bellevue, Washington, when she was 10. Her interest in design began at an early age. At the University of Washington (UW) she studied graphic design, and then spent her early career working as a graphic designer for architecture firms. But when she was invited to participate in a fashion competition in 1999, creating her first iconic monarch gown, everything changed.

"The competition paired designers with paper companies to create a garment out of paper and that was how The Monarch Dress was created. At the same time I realized I loved and wanted to design around the curves of the human form, utilizing fluid and luxurious textiles."

The paper butterfly dress is in Yang's archives, but she created a fabric version soon after, which remains one of her signature dresses. "The Monarch is still one of my favorite dresses today,"Yang said.

Yang earned her BFA in graphic design from the School of Art at the University of Washington. She shared that among the awards and honors she has received her favorite is The Timeless Award from the UW's College of Arts and Sciences, awarded to only 100 graduates from the college.

Yang's love for design is in her blood. Her grandfather was a well-known architect in Taiwan and her mother is a artist of traditional Chinese painting. "We have an industrial designer, engineer, interior designer and many other family members in the creative field. If any of us didn't become a designer, my family would be surprised" she said.

Ever since she started her fashion career, Yang has sought to contribute to the community through charity and donations. Her annual fashion shows have benefited Seattle Children's Hospital, Plymouth Housing, Seattle Cancer Care Alliance, Swedish Medical Center, Camp Korey, Pacific Northwest Ballet, and many other organizations and charity projects. Luly enjoys sharing her knowledge and experiences with students and the community.

"It feels natural to me, to use what resources I have to contribute,"Yang said when asked about her passion to help others.

In 2010, she was selected one of the Puget Sound Business Journal's Women of Influence, an award that recognizes local women for outstanding business and philanthropic contributions to the community.

Luly plans to launch an online-boutique on April 12 that will offer her first ready-to-wear collection, and to make them available our clients nationwide. "I visit Asia twice a year and we have dressed TV and movie celebrities domestically, in Beijing, Shanghai, and Vienna,"Yang said, in explaining that she is also looking to expand in Asian cities including in China.

"I love dim sum. I frequent the international district for meals,"she said. She explained that she would drive to her favorite dim sum restaurant directly from the airport immediately after traveling to Europe, which has less choices for Asian cuisine than the West Coast.

Yang believes that great design inspires people to become the best version of themselves. With this in mind, she said that she strives to create garments that make women feel their most beautiful and confident: "My dream is to create a world filled with beautiful things that inspire us to live better and to be better." 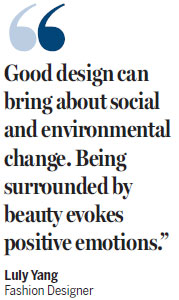 China tilts to Kabul with US pullout

No letup seen for business travel

China No 1 dumper of plastic into ocean