Health, education fields in China to get more mobile

The Internet industry has proved itself to be an increasingly important powerhouse of China's economy. But tycoons from the country's rising online sector want to do more to change people's everyday lives by bringing livelihood-related suggestions and proposals to China's annual two sessions, the country's most important political event.

Ma Huateng, chief executive officer of Tencent Holdings, one of China's largest Internet firms based on market value, said on Tuesday that his suggestions will focus on market penetration and the use of the mobile Internet to improve people's livelihood.

Ma, who is a National People's Congress deputy of the Guangdong delegation, suggested that the government should boost the use of the mobile Internet and connect "people and public services digitally", especially in the areas of healthcare, education and pollution.

Ma didn't go into details about his suggestions, but his ideas are in line with a proposal raised by Li Yanhong, chief executive officer of Baidu Inc, one of Tencent's major competitors in China.

Li, who is a political adviser of the National Committee of the Chinese People's Political Consultative Conference, brought two proposals to this year's annual session, which opened on Tuesday. 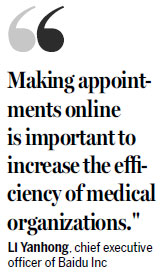 One proposal is to enable companies to offer services to help people make appointments online for hospital visits.

"Making appointments online is important to increase the efficiency of medical organizations," he said. However, many cities don't allow commercial organizations to launch such online services.

Some of the online registration platforms launched by local governments are very difficult to use, he said.

Analysts said that China's big tech firms have been adding a variety of mobile consumer services, such as hailing taxis, paying for movie tickets and booking vacations.

Integrating public services into the mobile Internet is the next stage of China's "Internet of Things" revolution, said Neil Flynn, an Internet expert and portfolio manager at Alcuin Asset Management.

Flynn said that the fourth-quarter earnings of Chinese Internet firms showed that mobile traffic is growing at a much higher rate than personal computer traffic.

"The more that people use their phones, the more comfortable they will be at using their phone for other services, such as education and healthcare," he said.

Li Zhi, senior analyst with Internet consultancy Analysys International, said that e-commerce - selling and buying products online - is only the first phase of the Internet industry. "As the industry grows into the next level, the exchange of services is going to be the key battlefield for tech giants."

"Education and healthcare have the biggest potential to become the next trillion-yuan market because no one wants to be stingy on getting a good education or getting good treatment," Li said.

US ambassador to S.Korea attacked

China refutes US concern over security

China could pass US in electric-car market: expert

China's defense budget to rise about 10%