While Beijing is drawing increasing numbers of mixed-blood families brought by the influx of expatriates, the metropolis is also embracing an integrated culture featuring "mixed" layers of definitions on ethnicity, family and identity.

Ever since she has been partly based in the Chinese capital, starting in 2009, CYJO, an American visual artist, has shrewdly captured a growing cultural fusion dynamic similar to what she had encountered in New York, where she had lived for 15 years.

Today, more than 100,000 foreigners are believed to be living in Beijing. Some of those foreigners end up marrying Chinese nationals. Last year, the Beijing Civil Affairs Bureau said an average of 1,200 such couples register for marriage every year.

However, a Chinese person marrying a non-Chinese can still be considered unusual by people with traditional mindsets.

"I have been told by some locals that the prospect of having to encounter and iron out possible cultural differences being from different continents means that more work may need to be done to maintain the marriage," CYJO said. "However, this idea is changing especially in first-tiered cities."

CYJO's photographic and textual series Mixed Blood was conceived in such context.

Starting in 2010, CYJO has shot family portraits for 10 mixed-race families in Beijing and nine in New York. They are either from CYJO's own community or people she has met randomly or recommended by friends.

"Choosing Beijing has allowed some topics to come to surface, like the rapidly changing landscape of the city and culture, the cultural diversity within China's 56 ethnicities and the migration stories that stems from Chinese history," she said.

In each photograph, family members stand side by side with each other and occupy the majority of the frame against the background of their living space, surrounded by furniture and decorations that give away "different characteristic layers of the family".

"The project brought me into the homes of the families where their portrait was taken. The families defined themselves with their own stance, clothing and narratives," CYJO said.

Usually, father and mother are presented on the left side of the photograph followed by their children on the right side of the group. Each individual faces forward and looks into the camera lenses, meeting the gaze of the viewer.

The standing position, with feet firmly on ground and arms at the sides of their bodies, also produces a "striking uniformity". Noticeably, all family members keep certain space from each other without touching with the exception of some small kids.

"The space between the individuals suggest that the nature and boundaries of racial and ethnic identification are, incrementally, becoming more of a personal choice than a socially imposed condition in today's society," said Nik Apostolides, an independent curator and former associate director of the Smithsonian's National Portrait Gallery in Washington.

Moreover, among the 10 Beijing-based families, CYJO did not reinforce the stereotype of a White male and the Asian female paring by presenting only five such couples. Two families consist of Asian fathers and mothers of European descent while the remaining three couples are of both different Asian ancestries.

"In this way, Mixed Blood makes a distinct shift from previous representations of discourses on multi-racial couples and individuals," said Ashley Bruckbauer, a doctoral student in the Department of Art History at the University of North Carolina at Chapel Hill.

In CYJO's series, family members including some of the children were interviewed, where they expressed themselves on questions such as: "home" and "mixed blood" - what does this mean? Citizenship and ethnicity - how is it balanced within the individual and the collective identity? Traditional culture - how does it survive and evolve during modernization?

"What surfaced was their own definition of self and how they navigated and embraced multiple cultures and recognized them in their family units," CYJO said.

For example, the Chandola family in Beijing has Korean and Indian ethnicities, but their kids know Beijing as their home because they were born and raised here, with Mandarin as their native tongue.

Based on the answers, CYJO also summarized brief family profiles that tell their names, ages, professions, nationalities, languages and their feelings about life.

Although Beijing may not be as racially diverse as New York, CYJO said multi-ethnical families in this city boast of some distinct features that distinguish themselves from their US counterparts, for instance, the multi-lingual ability.

Today, being "mixed blood" does not have to bear tragic historic backgrounds, and the once discriminatory polices have also been largely abolished in many countries, but the battle for ethnic equality is far from over.

Maya Soetoro-Ng, an internationally known educator and multi-racial identity researcher with the University of Hawaii, said CYJO's portraits are not just about choosing or unifying race or ethnicity; they hint at tensions and at differences in the power of heritage.

"They have historical echoes and teach us about colonialization, inequality, oppression, forgiveness and the kind of powerful love that drives people to cross boundaries," said Soetoro-Ng, who is also half-sister of President Barack Obama.

Mixed Blood is currently on exhibit through early April at the Three Shadows Photography Art Center in Beijing. Last year, the series was also exhibited in Chengdu, Dalian and Shanghai.

Being an American with Korean ancestry, CYJO is also known for her KYOPO project (2004-09), a similar series that profiles over 200 individuals of Korean ethnicity, mainly Korean Americans, in an attempt to visualize the evolution of their interlayered identity and culture. Mixed Blood is actually a derivative of KYOPO.

While offering that Mixed Blood is a continuing project to be exhibited in many other cities, CYJO said she has been working on a few other projects that "follow the same lineage, which investigates the notion of categorization within our global context".

"Perhaps the families will allow us to focus on the connective qualities within people, the humanistic aspect, where both similarities and differences can be celebrated," she added. 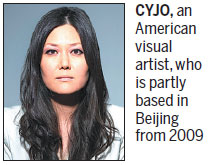 China, US bear down on fugitives, 'Sky Net' unleashed

Analysts: US urged to not politicize bank